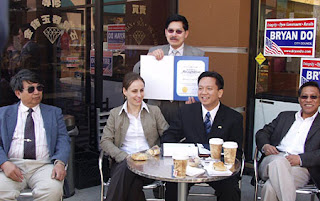 Bryan Do, after months of indecisiveness, has now told people  that he is throwing his hat in the ring for the city council race to replace the incumbent Madison Nguyen.    There are now at least 4 challengers against Nguyen.  They  have either declared their intention or already filed their statement of intention with the city clerk.

Michael Tran, a real estate investor from southern California, who is currently residing in the Evergreen area, publicly declared his intention since October of last year.  He is backed by Vietnamese American Community of Northern California.  VACNORCAL is the same group that is suing Madison Nguyen and the city for Brown Act violation.    A summary judgement is expected in February.  James Chadwick, one of the best lawyers in the Bay Area,  is the lead lawyer for VACNORCAL.

Phu Le, a long time community activist, a close friend and advisor of Councilman Kansen Chu, had filed his statement last week.  A resident of Milpitas and a county health commissioner, he is well known for  his supports of many politicians.  He is a serious challenger to Madison Nguyen according to a recent article by the Mercury News - http://www.mercurynews.com/internal-affairs/ci_14296808

Bryan Do, another community activist and one time a city council candidate for District 4, has many political ambitions.  According to Bryan, he is the chief strategist and unofficial advisor for Vietnamese-American Voters of Northern California Foundation.  This organization is formed by the Recall Team after their defeat by Madison Nguyen.

The fourth candidate is Minh Duong, another well known community activist, a small business development commissioner and a one time District 8 city council candidate.   He is well liked in the community and is considered by the community to be less controversial than the other four candidates.
The convention wisdom is that not all four of the challengers will actually be running.  The two challengers who are likely to drop out are Bryan Do and Michael Tran because they both know that they have no chance of winning.   On the other hand, they all could stay in and may the best man wins.   Bryan Do can play a spoiler for he has nothing to lose.

No matter who is running, the real favorite in the election of course is Madison Nguyen.  It is almost impossible to defeat a Teflon incumbent.
at February 01, 2010

Here is an update from the SJ Mercury news:

New San Jose council hopeful looks likely to get Mayor Reed's nod
Don't hold your breath, but it looks like one member of the San Jose City Council's union-friendly bloc, Kansen Chu, will have an opponent next year. The Chu challenger is Tam Truong, a 30-year-old San Jose police detective whom IA spotted having coffee Friday morning at Flames with Mayor Chuck Reed.
Truong, a Vietnamese-American who was a Santa Clara County sheriff's deputy before joining the police force in 2008, took out his papers for the District 4 seat Friday morning.
IA's sources say the young detective, who was recently chosen as recording secretary for the Berryessa Citizens Advisory Council, looks favorably upon Reed's proposals to tame San Jose's pension costs. The mayor's political consultant, Vic Ajlouny, told us that the mayor will not endorse Chu, which is hardly a surprise.
Reed is apparently still reviewing Truong's credentials, but don't be surprised if the detective ultimately gets the mayor's nod.