Rumor has been floating around for the last 2 months that California State Senator Jim Beall thinking about running for mayor  in 2022.   His senatorial term will expire in 2020 and at 67 years old, he has a lot left in politics.  Beall has been a politician for most of his life starting out as one of the youngest councilmen in San Jose City Council when he was elected at 28 years old.

This unexpected development could make an interesting show down with Cindy Chavez, the current Santa Clara County supervisor.   The convention wisdom whispers that a "succession plan" in discussion between San Jose power brokers has Mayor Sam Liccardo running for US congress in 2022, most likely for the current seat of Zoe Lofgren if she ever retires, and Cindy Chavez for the mayoral seat.

The popular politician has served in every elected local position except mayor.  If this is true and he has a successful election, it will be a nice cap to a remarkable career in public office. 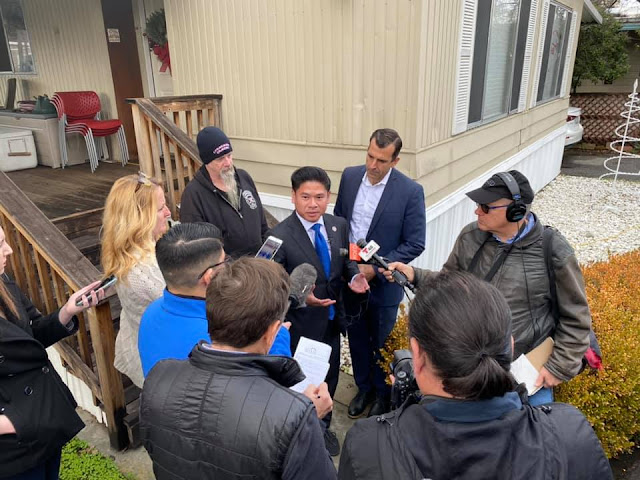 This week, more than 1,600 residents of  Westwinds Mobile Home Park, the largest in San Jose, received notice that they could be displaced by August 2022 as the owners want to evict residents so that the land can be used for redevelopment.

The Bay Area's short supply of houses and expensive land have spawn deals with deep pocket real estate developers to bring conversion of mobile home parks to high-end housing or commercial properties.  Some Bay Area mobile home parks have been threatened or closed in recent years.  This has deepen the crisis of the lack of affordable housing in the Bay Area and the displacement of the middle class and low-income families.

With potential huge backlash for both Mayor Sam Liccardo and Councilman Lan Diep, representative of District 4 where Westwinds is located, they held a press conference yesterday at the mobile home park.  They promptly announced a citywide proposal that would offer better protection of the mobile home parks from redevelopment by imposing higher review standards and require city council approval for any redevelopment project.

Councilman Lan Diep stated: " This is personal to me and I will try to do everything to protect the park". 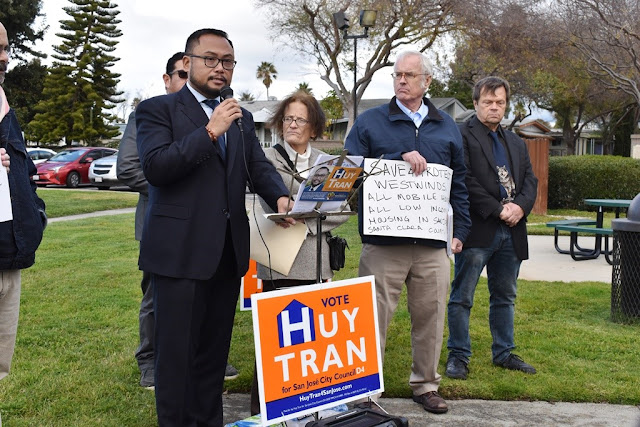 Many residents afterward went to hear Huy Tran, an affordable housing advocate and labor legal counselor, talked about his fight for affordable housing and the real story behind Westwinds Mobile Home Park.  Representatives of State Assemblyman Kansen Chu  and Congressman Rho Khana were there.  Former Assemblywoman Sally Lieber and other elected officials from cities within Santa Clara County also were on hand to speak about the issues.

In 2016, the City Council approved a one year moratorium on mobile home park conversion.  In 2018,  to replace the moratorium, Councilmen Sergio Jiminez, Raul Peralez and Don Rocha proposed a land use designation exclusively for mobile home parks in order to help preserve affordable housing for the city.  They specifically sought to protect Westwinds along with another park.  However, Councilman Lan Diep and 5 other council members refused and asked for further review.   Basically, they voted it down.

Huy Tran, also a candidate for city council in D4, wants to reinstate the moratorium for so long as it takes to create a Mobile Home Designation for city general plan and strengthen provisions of city ordinances for protection against unjustified evictions.

Many residents attended Huy Tran's event are not convinced Lan Diep has sincere intention.  To them it might be just another political maneuvering that will ultimately leave them at the short end of the stick a few years down the road.

One resident wonders out loud whether Lan Diep is just buying time to get elected in 2020 and then business as usual for the city council with the one -vote majority has often showed their preference for real estate developer over affordable housing ?

Lan Diep has a trust issue with many residents of D4 and this is just one example. 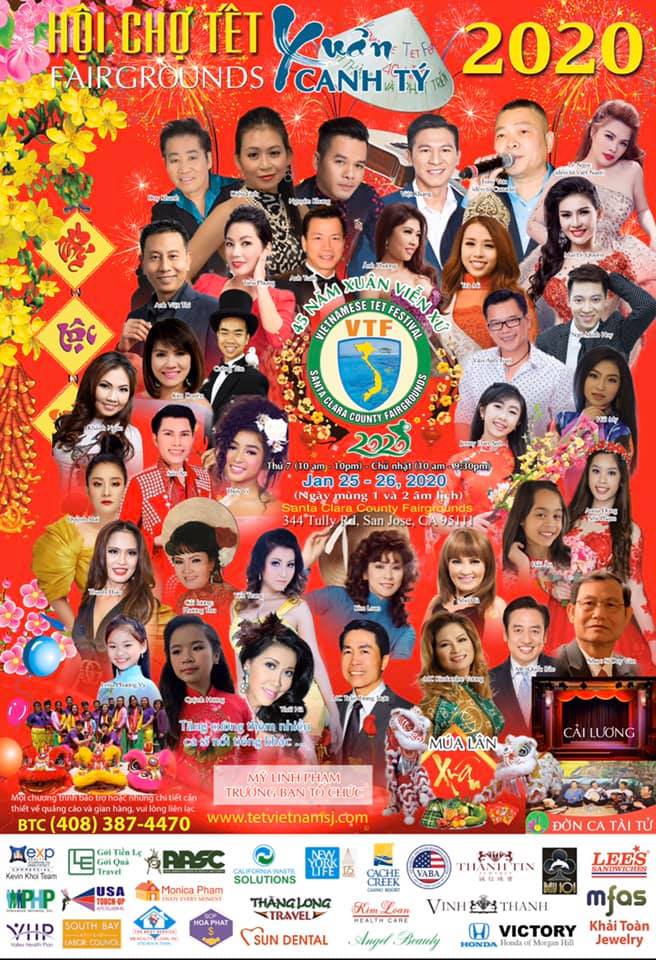 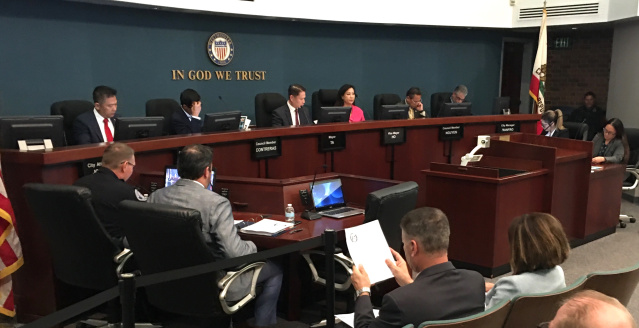 With the multimillionaire Hoang Kieu spending more than $500,000 to help the recall effort,  a political group called Westminster United headed by David Johnson has successfully submitted enough signatures to trigger a recall election of 3 out of the 5 members of the city council.   Three petitions were submitted last month to recall Mayor Ta Tri, Councilwoman Kimberly Ho and Councilman Charlie Nguyen.   The required signatures were verified last week by Orange County Registrar of Voters.

The city council will convene on January 8, 2020 to determine the date for the recall election.  The date has to be no less than 88 days or more than 125 days after the meeting.  It will likely fall in early May or at the end of April.  The ballot will allow voters to vote for or against the recall.  And if for the recall, they will have the opportunity to vote for a replacement.   All three elected officials sought to be recalled cannot be candidates on the recall ballot.  However, they are allowed to run for the general election in November if they lost in the recall.

It has been a bitter fight between two factions in the city council.  Councilmen Tai Do and Sergio Contreras want to remove their colleagues who always vote together as a majority bloc.  They are frustrated that they don't have the majority to control the agenda and the vote on issues that matter to them.   Westminster United gathered 11,285 signatures over the summer and 9,047 signatures were qualified.  They raised less than $10,000 while the rest of the money came from Hoang Kieu to hire signature collectors, consultant and advertisement.   Legally, they only require to submit 8,736 signatures to qualify for the recall election;  this number represents 20% of the city registered voters.  The grievances for the recall are mostly political in nature and have no substance.  But again, we are living in an era of great divisiveness where everything is blurred between the line.

There are 43,680 registered voters in Westminster City and 41% are Vietnamese-American.  The city has over 91,000 residents and the majority is Asian.   Mayor Tri Ta was re-elected in 2018 for a fourth term.   Councilman Charlie Nguyen was first elected in 2018 after 3 attempts.  Councilwoman Kimberly Ho was first elected in 2016 and will have to run for re-election in November 2020.  In 2020,  the city will be redistricting and the election will be based on 5 new districts.
at December 30, 2019 No comments: Links to this post

Millionaire Hoang Kieu issues a press conference to announce his political supports of local OC candidate.  Note that even though there is no official result on whether the submitted signatures for the recall of 3 elected council members of Westminster are legitimate and meet the threshold required for a recall election, HK claims the petition to recall is a success. 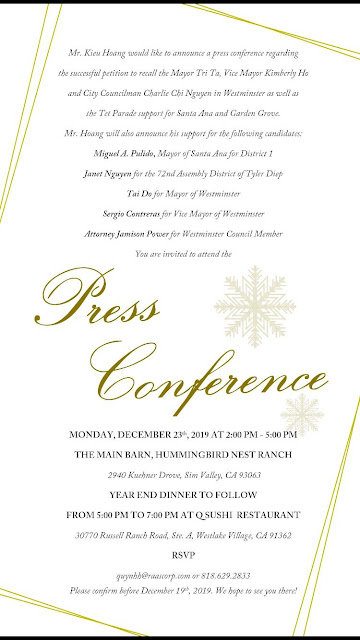 Here are some pictures sent out by the famous multi-millionaire Hoang Kieu.  He can be seen enjoying himself at the White House with President Donald Trump, his son -in-law and other members of his cabinet including the Vice President.

Losing his title as billionaire this year as he was forced out of a Chinese health care company he co-founded (see LSI article) did not seem to dampen his spirit.

LSI is wondering how can one be on the guest list of the White House Christmas Ball for next year. 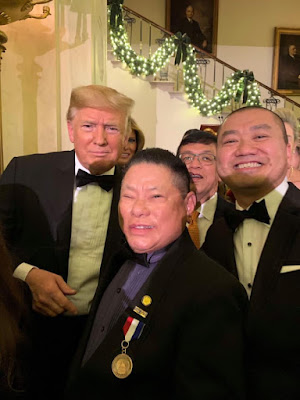 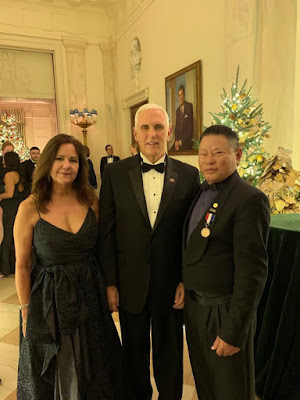 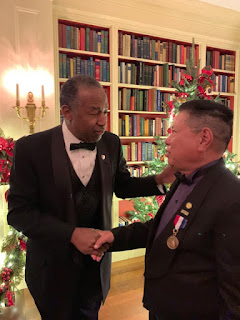 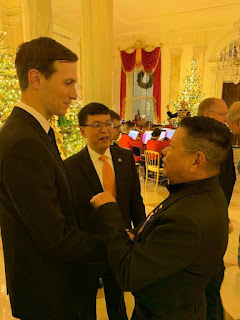 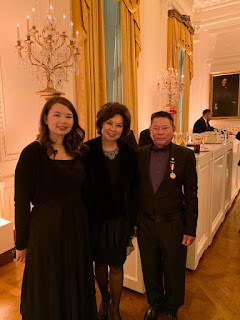 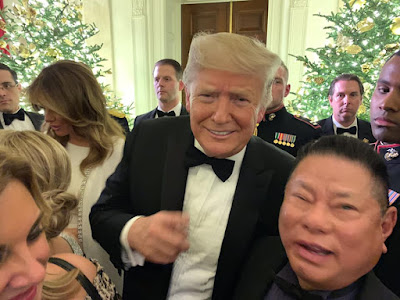