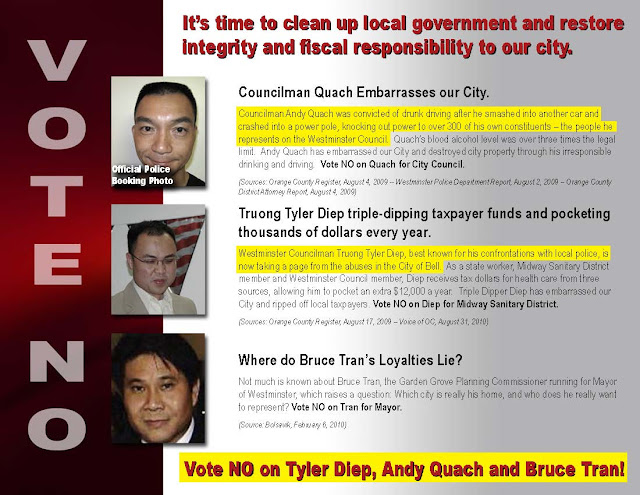 LSI readers received this hit piece their mailboxes the other day.
at October 22, 2010 No comments: Links to this post

The Strong Emergence of Vietnamese-American Democrat 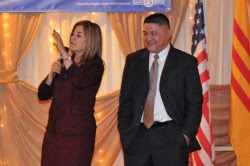 In a mid-year election cycle where the Republican Party is expected to win the majority of the races, a funny thing transpires in Little Saigon Orange County and the politics within the enclave of this once dominant Republican bastion.

Democrat Phu Nguyen,  a first time candidate is basically in a tie with his Republican opponent, Allan Mansoor, to succeed Republican Van Tran in California’s 68th Assembly District.  This district has traditionally been a Republican seat.   However, according to the latest poll by Tulchin Research as reported here,

Nguyen’s overwhelming lead among Vietnamese American voter’s puts him in a position to win in this district because of the expected large number of likely voters are Vietnamese-Americans.   In addition, Phu Nguyen has received strong supports of big names Democrat politicians like Lou Corerra, Loretta Sanchez as well as powerful groups like firefighters and police officers associations that traditionally support Republican candidates .

Democrat supporters like the lawyer Phu Do (co-owner of STBN TV and one of the most successful lawyers in Little Saigon) are doing their best to get out the votes against Allan Mansoor who is supported strongly by Van Tran.

The Vietnamese-American Democrats are mostly young and well educated.  They are in their 20s and the 30s and like Phu, they really believe in making a difference in issues that are relevant to the welfare of the daily folks like education, jobs and healthcare.

Nguyen is currently has the momentum going into the last 2 weeks of  the election with more money than Allan Mansoor and less negatives.

His candidacy so far has helped Loretta Sanchez within the Vietnamese-American voters, especially those voters that are looking for any reasons to vote against Van Tran and his people.  And there are a lot of anti-Van Tran voters at the moment since they could not stand his arrogance while truly afraid of his power hungry personality to be the "Godfather" of the Vietnamese-American politics.  After all,  they risked their lives to come to America so that they could be free of political tyranny.
at October 20, 2010 2 comments: Links to this post