Andrew Do Ahead in OC Supervisor D1 Race

More than two weeks after the election, the finally tally is almost done for the Supervisor D1 race.   This is a race where the  Democrat Party is hoping to take the seat back.  Lou Correa lost to Andrew Do by 43 votes in a special election in 2015.  After all, the district has 9% more registered Democrats than Republicans.  The Trump Factor also resulted in an unprecedented high Hispanic turnout.   In the primary, Santa Ana City Councilmember Michelle Martinez beat current Supervisor Andrew Do by almost 4%. 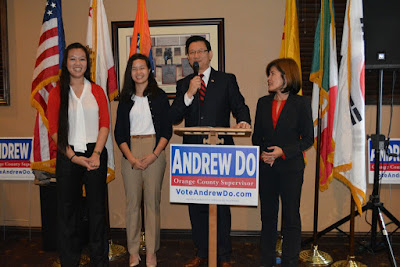 On Election Night, Do was leading by more than 10,000 votes.   Do's lead now has shrunk to 1,059 votes as a large number of ballots from Santa Ana came in.

Now with about 2,900 votes left to tally, mostly in Garden Grove, Fountain Valley and Westminster (ballots from the three Vietnamese-American strongholds), it is unlikely that Martinez will catch up.

The 2016 OC election results can be interpreted as this is either a once in a lifetime election cycle or a trend that will turn OC eventually Blue.

Sylvia Arenas Ahead by 87 Votes After Final Tally

The manual automatic recount will occur next week as mandated by county voting law when the difference is less than 0.5%.   When it comes to recount, nothing is certain.  So this election night will likely carry on for another 2 weeks or more depending on whether Nguyen will need to have a second recount or not. 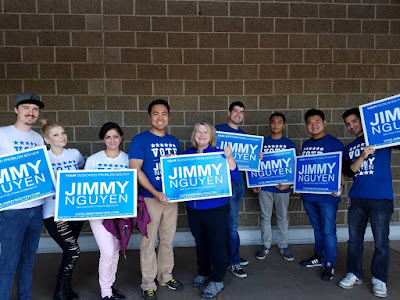 Nguyen outspent Arenas 2 to 1 with  Chamber of Commerce and National  Association of Realtors spending close to $150,000 in his support.

He also received the support of Rose Herrera, the outgoing Vice Mayor and D8 residence, as well as well known community leaders of D8 - Pat Waite and Denise Belisle.   Former Mayor Chuck Reed also gave him a ringing endorsement.   The Vietnamese-Americans  in D8 constitute 22% of the total registered voters.

He was the favorite to win the election since he has name recognition with strong endorsements.   He ran 4 years ago and lost to Herrera in a landslide.

LSI has observed 3 recounts involving Vietnamese-American candidates in the last 8 years from Orange County to Santa Clara County.  It is an emotional roller coaster and whoever wins this race deserve a big medal for mental toughness.

The recount will be initiated soon after all the ballots have been counted.   It is excruciating for both candidates to go through the ordeal of such a tight race without knowing what their fate will be.   It is only luck at this stage.
at November 21, 2016 No comments:

Almost two weeks after the election, the race for Orange County Supervisor D1 has not been settled yet.  Andrew Do is leading Michele Martinez by 4,398 votes after 134,944 ballots counted.  With still about 12,000 ballots left to be counted, there is still a small chance for Martinez to catch up because these ballots are coming in from heavy populated Hispanic area.

Do was leading 5,902 votes after 107,840 ballots counted 5 days ago.  He lost ground steadily but his lead is substantial enough that his supporters are hoping that it will hold.

Hopefully by Thanksgiving, the picture will be clearer.

With about 1,000 ballots (including provisional ballots) left to be counted and the difference  margin will likely be less than 0.50%, the city council race for D8 appears to head for an automatic recount.   After 33,889 ballots counted, Sylvia Arenas is 51 votes ahead of Jimmy Nguyen, 50.08% vs. 49.92%.

The race is far from over for both candidates as they practically are living out of the ROV building for almost two weeks now.  This will mark the second time this year a race involved Vietnamese-American candidate is facing recount.  And the margin of victory could be decided by a few votes.
at November 21, 2016 No comments: