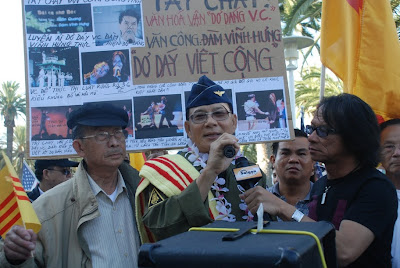 After posting bail last Friday night,  Ly Tong was seen the next morning down south protesting along with the anti-communist crowd at the Anaheim Arena against Dam Vinh Hung.    The protest organizers were not expecting more than 500 people participated in the demonstration but with the news Ly Tong coming to the town, the crowd swelled to about 1,300 people. 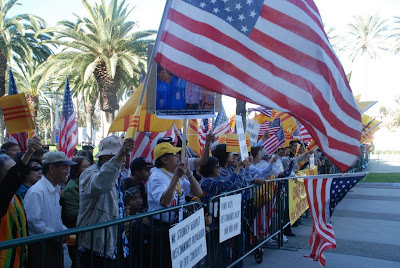 Almost every Vietnamese-American candidate running for office in Little Saigon this coming November was waiting in line to see him, including the State Assemblyman Van Tran.    People were showering him with flowers, gifts and chanting his name everywhere.

In an interview with a local San Jose newspaper (Thang Bom),  Ly Tong said that he only used concentrated perfume and not pepper spray.  He said that the DA has all the evidence.   If this is the case, the charge of "using a deadly weapon" by the DA is with an agenda.   LSI learned that  the Vietnamese Consulate in SF had asked the DA to prosecute Ly Tong to the fullest extent of the law.  In response, Ly Tong's lawyers (Tam Nguyen, Michael Luu ) filed complaints against the IRS and other state and local agencies against Dam Vinh Hung and his handlers for neither having a licence nor filing taxes  for previous shows. 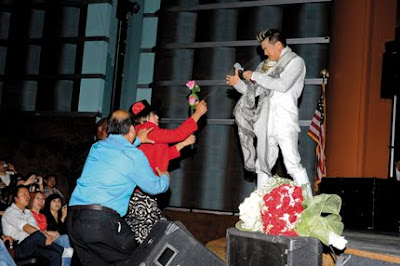