Billionaire Hoang Kieu is well known for his flamboyance and his generosity in the Vietnamese-American community.   He donated $10 million total to flood victims in San Jose and Houston.  He gave over half a million dollars to fire victims in Northern California. 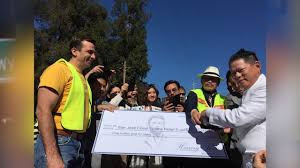 Hoang Kieu, a self-made Vietnamese-American billionaire who came to America in 1975 with nothing  but determination and hope.  He made his fortune in a company he founded called RAAS which focuses on providing blood plasma.  The 81 years old (as he declared his real age at a gala in San Jose 2 years ago) eccentric billionaire, now has diversified into wine, high-end restaurant and event catering, cosmetics, luxury handbags and nutritional supplements.  And just to have some fun, he even has his own musical show production.

Recently, he became the first recipient of Pride of San Jose award given out by  San Jose Mayor Sam Liccardo.  There is now a street named after him in San Jose. 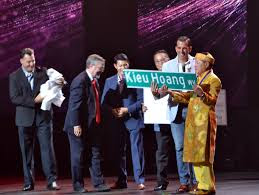 But in Southern California where he lives, it is a different story.  HK is embroiled in a recall effort of three city councilmembers of Westminster, a city where almost 45% of the voters are Vietnamese-Americans.   There are 4 Vietnamese-American city councilmembers, out of five, in Westminster.  HK is personally funding the recall effort just because these three councilmembers slighted him last year.  He is angry because they did not cooperate with him in his extravagant funeral arrangement for Ly Tong, a folk hero to the anti-communist crowd for his hijacking of a passenger plane in Vietnam in 1992 to drop anti-government leaflets.  He paid the funeral expense at the cost of $400,000. 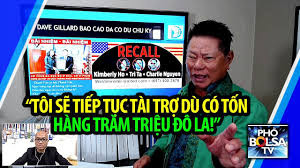 He claims to spend over $500,000 to help a recall group, Westminster United, to get 8,700 signatures required for recall.   He hires a political consultant responsible for the recall of former Governor Al Davis to help with strategy.  Almost every week for the last 3 months, he is on radio and Youtube live to make his case for the recalling of Mayor Tri Ta, Vice Mayor Kimberly Ho and councilmember Charlie Nguyen. 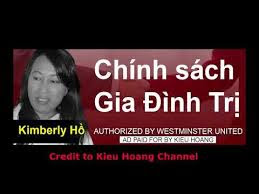 Running out of things to say, he recently dressed up as a king and demanded the castration of elected officials so that they can become his eunuchs.  Suddenly, he realized that Kimberly Ho is a woman, he laughed and said, "It does not matter, she is already an eunuch." 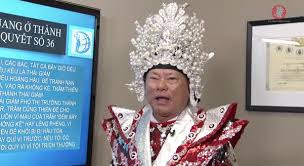 Just this week, he went overboard and declared he will castrate and break the teeth of Luong Ngo, a community activist opposing the recall.  Ngo promptly filed a complain with the FCC and the Garden Grove police.

In the Youtube video, he also disclosed that he is being  forced out of Shanghai RAAS, the company he co-founded over 27 years ago and the main source of his wealth.  They offer him a buyout of $380 million.

HK was worth $3.8 billion in 2015 according Forbes based on the market value of Shanghai RAAS of $17.7 billion at that time.   He blames that people opposing the recall with their smear campaign against him cause this predicament of him being ousted.  He promises to sue them for his financial loss.   He claims to have file lawsuits against the city of Westminster and other members of the Vietnamese media.

It is difficult to follow his rambling reasons on why and what, but he is certainly creating a buzz in community.  Also, when you are an octogenarian with hundreds of millions at your disposal, you can pretty much say and do whatever you want (within legal limit of course).

The History of Pho

I try to find " Phở " whenever I travel.  This humble Vietnamese beef noodle soup first started out as a street food, a quick and cheap meal for the common laborers at ports along the Red River in North Vietnam more than 100 years ago. Yet now it is an international symbol of Vietnamese cuisine just like hamburger to American food culture and symbolism worldwide.

I found phở in Dubai with one restaurant serving in a 5 liter bowl.  One can have phở in exotic Casablanca and of all places, New Delhi where cows are still considered sacred.  In Tel Aviv, there is a small group of Vietnamese expatriates and some making a living by opening phở restaurants.   There are a dozen phở restaurants in New Zealand which is far down under.  I even had phở  far up north close to the Artic Circle in Finland.

Phở reflects the diaspora identity of the Vietnamese as they disperse throughout the world after the Vietnam War ended in 1975.

The History of Phở and Its Origin

We know that phở started out as a street food in Ha Noi, the ancient capital city, and Nam Dinh (90 km SE of Ha Noi).  The noodle soup was served as breakfast or late night snack.  Both cities claim to be the birth place of phở.

The first mentioning of the word "Phở" was noted in a letter sending back from Paris to his family in Ha Noi by a businessman named Vinh van Nguyen in 1906.  He lamented how he missed Vietnam every time he heard street vendors peddling their goods in Paris, for they reminded him of the phở street vendors and their unique holler calling attention to their steamy hot noodle soup.  In 1913, the novelist Hoan cong Nguyen wrote about eating phở late in the night and how it costed him 2 pennies for a bowl of phở.

Phở must have been popular enough to catch the eyes of the Frenchman Henri Oger.  In his oversize illustrated book titled Technique du Peuple Anamite 1908-1909,  it has an illustration of a phở street vendor carrying on a pole two cabinets containing  soup pot, noodles and condiments. 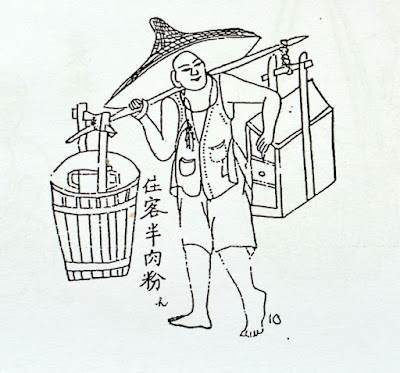 In 1913, the artist Mauric Salge painted a picture of a phở street vendor peddling the food late at night in Ha Noi. 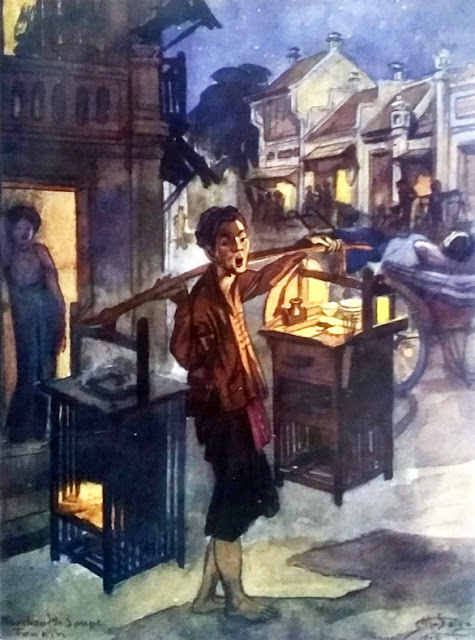 Back then, a phở street vendor must have a fine sense of balance to be able to carry on his shoulder a long wooden pole with one end dangling a cabinet with a boiling pot of soup sitting on top of a coal burning cauldron,  and the other end with a cabinet full of noodle, beef, fish sauce, bowls and chopsticks.  Here are some more pictures of the street vendors and their customers in the early 1900s. 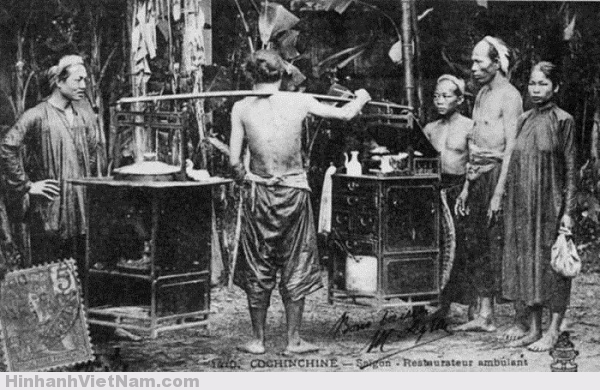 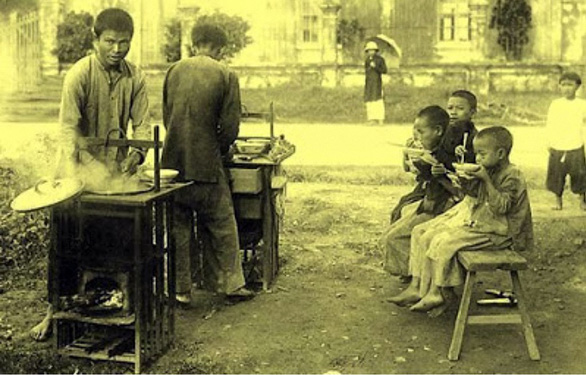 What is the Phở ?


Phở's main spice ingredient usually derived from the Chinese Five Spice mix (cloves, fennel, star anise, cinnamon and Szechuan peppercorns), charred onions and ginger.   The clear broth is the result of slow cooked beef bones and oxtail. The seasoning is done with fish sauce of course.  The soup is poured over rice noodle with thin cuts of beef flank or brisket, and garnished with chili peppers, green and white onions. 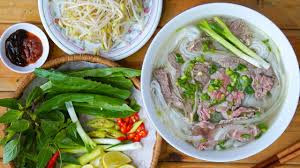 The origin of the word "phở" has a number of theories.   We know the word for rice noodle in Chinese is pronounced "phấn".  During the same period, Chinese immigrant in Ha Noi sold a dish called "ngưu nhục phấn" (Chinese: 牛肉粉)  which means beef meat noodles.  In his "Vietnamese, Chinese &; French Dictionary",  Eugène  Gouin (1957) defined the word phở as the corruption of the word phấn.

Phở also could have evolved from a dish called xáo trâu.  According to wikipedia:

Originally eaten by commoners near the Red River, it consisted of stir-fried strips of water buffalo meat served in broth atop rice vermicelli. Around 1908–1909, the shipping industry brought an influx of laborers. Vietnamese and Chinese cooks set up gánh to serve them xáo trâu but later switched to inexpensive scraps of beef set aside by butchers who sold to the French.  Chinese vendors advertised this xáo bò by crying out, "Beef and noodles!" or "ngưu nhục phấn". Eventually the street cry became "Meat and noodles!"  or "nhục phấn" , with the last syllable elongated.  The author Nguyễn Ngọc Bích suggests that the final "n" was eventually dropped because of the similar-sounding phân or "excrement".   This is likely what the Vietnamese poet Tản Đà calls "nhục-phở" in "Đánh bạc" ("Gambling"), written around 1915–1917.


There is a minority opinion that favors the idea that phở evolved from the French beef stew pot-au-feu.  And accordingly, the word "phở" is the Vietnamese pronunciation of feu.

Pot-au-feu is is a thick stew often composes of beef, potatoes, carrots, onions, other vegetables and usually eat with bread.  There is a stark difference between the two soups, one is clear broth serves over rice noodle, the other one is a heavy stew serves with bread. 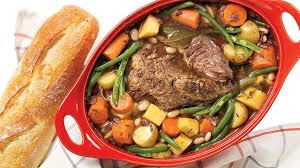 Whatever is the origin of phở, it became popular in Saigon as the result of  the large migration of people from the north in 1954 to escape the communist regime.   Here, in adoption to the Mekong delta flavor,  the dish is garnished additionally with Thai basil, culandro (saw tooth herb), bean sprout, black soy bean sauce and red chili paste.

And then with the mass exodus in 1975 as an aftermath of Vietnam War,  Vietnamese refugees left Vietnam seeking freedom with only clothes on their backs and memories of their homeland to start a new life in whichever country that would welcome them.  They also took with them their cuisine. Phở now becomes a common lexicon in many languages and universally recognized as a popular but unique Vietnamese dish.

On a personal level, thirty years ago,  I introduced phở to a young and ambitious Chinese student who came to US fresh out of China's most prestigious university - University of Beijing.  She thought it was one of best food she ever had.  She is now  a successful executive legal counselor for a major high tech company.  Occasionally,  I still receive an email from her asking for suggestion of phở restaurant as her travel taking her to different parts of the country and the world.

I guess as far as friendship goes, phở can be the the soup that binds.