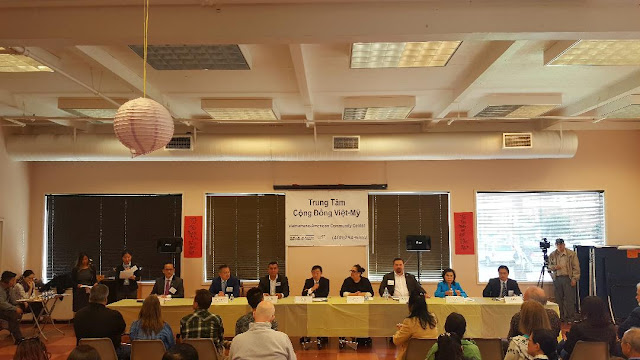 Here we go again, another hotly contested race pitting 4 Vietnamese-Americans against each others and 3 other candidates ( 2 Hispanic and 1 White candidates)


Current Councilmember Tam Nguyen is having a time of his life in fending off three Vietnamese-American challengers for that crucial Vietnamese voting bloc that makes up about 33% of the overall  registration.

He is being accused of being a communist sympathizer, unethical lawyer and now false campaign advertising.  The Vietnamese-American community is divided and without a united voting bloc, CM Tam Nguyen has no hope of winning the race outright in the primary.

So what is the conventional wisdom now that we are 5 days away?

CM Tam Nguyen also has a very dedicated group of 20 volunteers who have been walking the precinct for him since the beginning  of the year.   And he has a strong name recognition in D7.

Despite his shortcomings, he is actually well liked for his humility and easy going personality.

His opponents are strong and will split the votes within the Vietnamese-American community.  Van Le has her supporters and she has shown in 2014, she can attract votes.   However, this is her 5th try; will the voters just feel tire of her and her many failed attempts?

Chris Le admitted that he is spoiler.  He did not even bother to raise money or precinct walking.  Thomas Duong is new kid on the bloc with no records of community activism or participation.   Despite such inexperience and lack of record, the Mercury News and SVO (the other name for Silicon Valley Chamber of Commerce) are endorsing him just to further splinter the Vietnamese-American voting bloc.

Maya Esparza is being pushed to run by  South Bay Labor Council.  Does she really want to give up a cushy union job that she cannot be fired from and that pays more than $150,000 a year?  Not really.

Labor is doing all the walking, mailing and fund raising.  They just want to get back at CM Tam Nguyen for not voting for low income housing and other Labor's related agendas.

With such a low turnout expected (with less than 1/3 of the registered voters will cast their ballots), CM Tam Nguyen and Maya Esparza will likely be the top two candidates to go on to the general election.  However,  the wild card factor has always been, will the Hispanic voters go to vote?  If not, we might have two Vietnamese-American candidates in the general election. 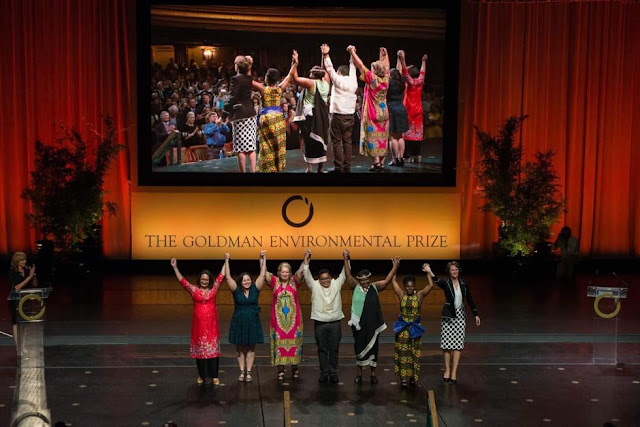 The Goldman Environmental Prize was established in 1989 by late San Francisco civic leaders and philanthropists Richard and Rhoda Goldman. Prize winners are selected by an international jury from confidential nominations submitted by a worldwide network of environmental organisations and individuals.   The prize is considered to be the Nobel Prize for environmental conservation and protection activism. 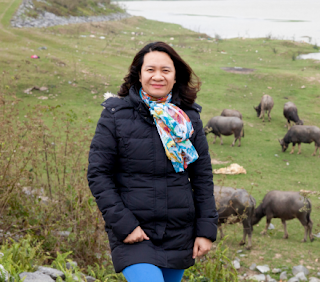 The 2018 Goldman Prize winners include the first Vietnamese ever to receive the award - Nguy thi Khanh.


The other winners are Francia Márquez, a leader of the Afro-Colombian community; Claire Nouvian, a tireless defender of the oceans and marine life; Makoma Lekalakala and Liz McDaid who built a broad coalition to stop South Africa’s massive nuclear deal with Russia; Manny Calonzo who spearheaded an advocacy campaign that persuaded the Philippine government to enact a national ban on the production, use, and sale of lead paint; and LeeAnne Walters who led a citizens’ movement that tested the tap water in Flint, Michigan, and exposed the Flint water crisis, compelling the local, state, and federal governments to take action to ensure access to clean drinking water.

See excerpt below from an article written by Do Minh Tam and Lars Blume for Energy Transition.


"...Ms. Nguy Thi Khanh was nominated for her work to slow down coal power expansion in Vietnam. For Khanh, Vietnam’s energy future is at a crossroads and every decision and every dollar invested today will be felt in Vietnam and in our earth’s climate for decades to come. When the Vietnamese National Assembly decided not to pursue nuclear power in 2016, Khanh and GreenID saw that changes for the better are achievable.
Born into a rural family in Bac Am, a village in northern Vietnam, and growing up near a coal plant, Ms. Khanh experienced the pollution and dust from coal operations firsthand and witnessed many people in her community developing cancer as a result. She was always passionate about the environment and after graduating from college began working on water conservation issues and community development for a small Vietnamese nonprofit organization.
In 2011, Ms. Khanh founded Green Innovation and Development Centre (GreenID) in order to promote sustainable energy development in Vietnam, as well as good water and air governance and green development. She also established the Vietnam Sustainable Energy Alliance (VSEA), a network of 11 Vietnamese and international environmental and social organizations that collaborate on regional energy issues. GreenID helped develop local energy plans to both support the uptake of renewable technologies and manage pollution.
This helped households and entire communities to minimize pollution of rivers, turn waste into energy, and acquire new, affordable technologies such as solar lights and worm farms. The success of the work has shown that there are very real, effective and affordable alternatives to energy from large hydropower and coal-fired power...."