Why Madison Nguyen Is So Hated in Little Saigon 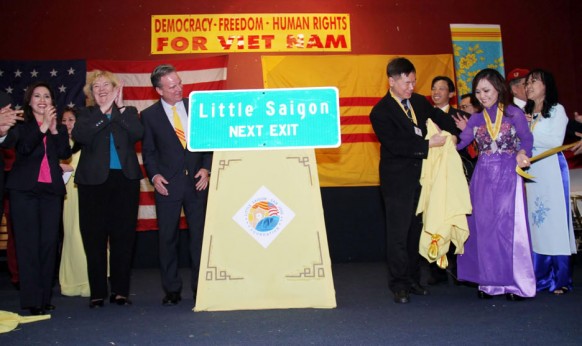 The name Madison Nguyen conjures up controversy and a lot of hatred among the Vietnamese-Americans in Little Saigon San Jose and beyond.   That is quite a feat for a locally elected official.    And all of that could be felt in the grand celebration of "Little Saigon" existing signs last weekend at the Unity Center.   About one thousand people showed up for an all afternoon celebration marking the putting up of the "Little Saigon" exist signs along Highway 101 and Story Road.  Congresswoman Zoe Lofgren, Supervisor Dave Cortese, Assemblywoman Nora Campos and other elected officials were on hand to greeted the people.

Not surprisingly,  Madison Nguyen did not show up even though the celebration was in her district, less than a mile from her house.   Her staff said she was not invited.    This was the second time within a month that she was snubbed by the local Vietnamese-American community leaders.   Last month, there was fund raising event for the signs and a dozen elected officials showed up including Congressman Mike Honda and 7 San Jose councilmembers.

It is safe to say that the majority of the Vietnamese-American in the Bay Area don't really care for her and a lot of them wish that she would go away for she had brought shame to the community, in their opinions.

However, they still have to her to kick around for another 2 years and of course the upcoming mayoral election in 2014.   Nothing will make the community happy than to take part in ending her political career.