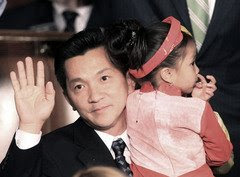 A group of African-American ministers have initiated the process of recalling US Congressman Anh "Joseph" Cao, R- New Orleans.

Congressman Cao came into office more than a month ago after a stunning upset. Due to a special election in December and extremely low turn out of Black voters, a relatively unknown and inexperience human rights lawyer won the election over an indicted incumbent. The district is made up of 65% African Americans and 85% Democrats.

What prompted the recall is Cao's two votes agaisnt President Obama's $787 billion stimulus package as part of the Republican Party attempt to block the passage of bill.

The recalling process is daunting since it will required 101,000 signatures in 6 months period. And if the recall proponent succeed at that, and voters approve the recall, it appears that Congress would not accept the result. However, the mininsters press on claiming to already collected 13,000 signatures in the last two weeks.

Even if Cao isn't recalled, such an effort could provide a formidable base for anyone who wants to oppose him in 2010.

The Battle Heats Up for Recall Election 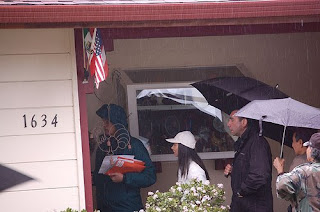 Here is the latest update and beyond in District 7:

4. In the last November election, 80% of voters were absentee.


Current situation of both camps:

1. Nguyen's camp is really quiet this week. Except for some robocalls at 3:00 AM (Yes, 3:00 AM in the morning. A few people so far have publicly complained to City Clerk), she is just doing a lot of late night meetings looking at the number of latest polls. This is a sophisticated campaign runs by Nguyen with 50 questionnaire polling, up to date survey and of course the best technology available at her calling headquarters, South Bay Labor Council - the political machine in San Jose.

2. Labor and Nguyen are not focusing on the Vietnamese-American community anymore. To them, it is a lost cause. They will try to capture all the White votes and the remaining of the Hispanic votes. The latest number is very disturbing. It is a downward trend.

3. Recall Team's headquarters is full of activity with people making phone calls and having the last minute walking piece for the next one week. They are very well organized and understood what to do next. There are about 20 volunteers every night working. What they lack in money and the support of powerful political force and special interest groups, they make up in determination and passion. They are the underdog so of course they will need everything to overcome such overwhelming odds.


David and Goliath in every sense. The mightiest political forces in San Jose vs. a group of plain folks who united to do the right thing. History repeats itself often but will it repeat one more time?
at February 20, 2009 No comments: Links to this post

Madison Nguyen and Opposite Views 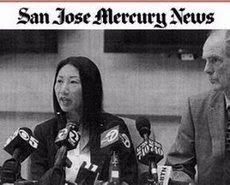 A Redux Weekend & A One Woman Economic Stimulus Package 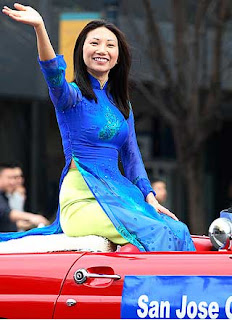 LSI went away for a weekend to Sacramento to observe the State Senate debate on the budget. It was 6 PM on Sunday and all the news crews from 4 major stations were gathering outside the State Capital since 3 PM. But no news since nothing get passed except for some political appointments to Board of Education, Board of Parole, etc... Out of boredome, LSI went into Arnold's office, took some pictures of self sitting behind the governor's desk before one of his staff walked in and asked which group LSI was with. Without knowing which group was touring what, the staff ushered LSI out. Arnold was in the building but not in his office.

On Saturday's morning, Mayor Chuck Reed and Councilmember Pete Constant went precinct walking with Nguyen. On the walk with them were Nguyen's campaign staff and the usual Nguyen's Vietnamese-American media. They knocked on 8 houses and 5 doors were not opened. Three other people who opened the doors did not look please.

It was raining hard, so they called it a day. Reed promised to have another precinct walk this weekend.

One suggestion to Nguyen though - instead of just advertising only in the Vietnamese-American community, Nguyen should let the mainstream media in on the event and get the most exposure.

The latest poll within the Vietnamese-American community shows the trend as expected. Nguyen is banking on the Hispanic and the White voters. The question Nguyen has to ask is why would the Hispanic community wants to vote for Nguyen more than they wanted to vote for Cindy Chavez. Chavez could barely get 20% turn-out in her mayoral race. If she had a 35% turn-out from her own natural base, it would have been Mayor Chavez and not Reed.

To the Hispanics community, it would be much better for Nguyen to be recalled so that they could either by appointment or election get their own people in this year.

The White voters are less than 10% of the vote. They themselves know they are irrelevant in this election so their turn out will also be low.

On the surface, it seems that with massive media support, unlimited resources putting in by South Bay Labor, elected officials and influential community leaders overwhelmingly behind Nguyen, this would be an election for her to lose. It still is but at least with over $300,000 already spent so far on salaries, media, equipment, phone, food, gas, etc.... Nguyen could proudly say, win or lose, that I am a one woman economic stimulus for San Jose. Matter of fact, this would go down as the most expensive race ever for a single council seat. Both sides will end up spending a total of $600,000 or more. Now if the economic multiplier is applied at a standard 1.73, this is a total of $1,038,000 pumped into San Jose economy.
That is a lot of dough. Thank you Madison Nguyen.
at February 17, 2009 No comments: Links to this post 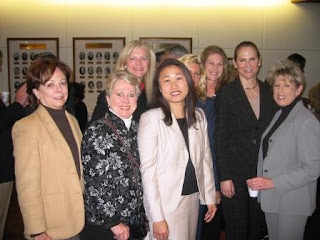 Please Join us to Attend a Debt Retirement Fundraiser for

To Donate by Credit Card: http://www.janetnguyen.com/

Although flexible, position is full-time (6 hours per day/5 days per week) from April 1 through December 18.

http://www.mlsolutions.com/
at February 16, 2009 No comments: Links to this post