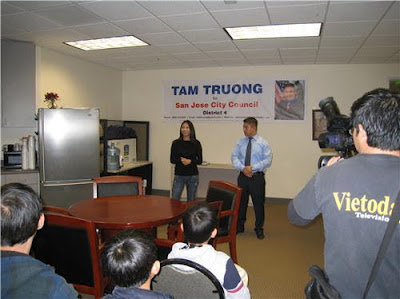 The race for San Jose District 4 city council is heating up as Tam Truong, a political novice that has not been seen in the community until now, is pushing hard to challenge the incumbent Kansen Chu. 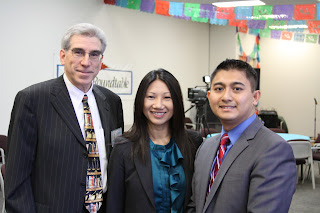 Nguyen has been spending time at his fund raising events and even showed up to give advise to the volunteers at Truong's campaign headquarters.     Nguyen has been quoted in the media for strongly emphasizing her point:   ".....Truong is the best choice for it is unprecedent for any candidates to receive the endorsement of both the mayor and vice mayor at the same time.."

The recent candidate forum arranged by Berryessa Citizen Advisory Council between Truong, Chu and another unknown candidate, Rafael Sabic, showed the lack of depth and understanding about the community by the challengers.  You can see the candidates in action at - http://bcacsanjose.org/


To Truong's credit and also Mayor Chuck Reed's astute memory, Truong is not as bad as Hon Lien, the disastrous candidate that Reed brought from again nowhere to challenge his political rival in District 4, Kansen Chu, in 2008.  However, for Nguyen and Reed to think that they are so powerful that they could string along a candidate of their choice and use their political muscle and reosources to persuade the people to vote for really an unqualifed candidate can be a turn-off for many voters.  But of course the reward is if  Truong wins, he will be indebted to them and hopefully be their puppet in City Hall.