Long Pham vs. Joe Dovinh, Can We Make Peace Now?

Long Pham,  a perennial Republican candidate for the state assemblyman seat in Orange County, is still mad at Joe Dovinh (D) for taking away some of the Vietnamese-American votes that could have been his.  It is such a close race for second place that  300 - 400 extra votes could have propelled him into the runoff against Troy Edgar.

Long Pham had run against Van Tran in two previous races; he also ran against Allan Mansoor who was endorsed by Van Tran.   Of course he lost by a landslide in each of these elections.   The lost against Mansoor in 2010 primary was particularly bitter since early in the same year he donated $2,000 to Tran's campaign and publicly announced his support for Van Tran and his congressional candidacy.   Van Tran simply took his money and ignored him.

So in 2012 with Diep Truong bowing out,  Pham thought that he would have a very good chance to at least be in the runoff.   He dropped $100,000 of his own money into the race.   He went on the offensive against Joe Dovinh by labeling him a communist sympathizer and refused to debate Dovinh in a local Vietnamese community forum.  He said:" I don't debate with candidate who has a pro-communist view point".

It is ironic since in the  Democratic primary for state assembly in 2010, Joe Dovinh was calling Phu Nguyen a communist because he has a business in Vietnam.  Of course Dovinh lost to Phu Nguyen.

Long Pham is an interesting candidate for he always has a hard time expressing himself in Vietnamese of issues except for the fact that he hates the communist.   But you have to admire his persistence.   He will be putting his name again in 2014, 2016 and so on.

Cindy Huynh of Ponoma County recently cashed in her lottery winning ticket worth $32 million.   She is joining a long list of Vietnamese-American lottery winners.   Some of the most notable ones are:

- Nguyen van Hien and his family members of 11 people won the PowerBall jackpot of $85.7 million in 2010.  They are from Baton Rouge, LA.  They have decided to form a familty trust called H and N  Family Partnership to manage the money as well as to donate some of the winning to charities and their Catholic diosece in Baton Rouge. 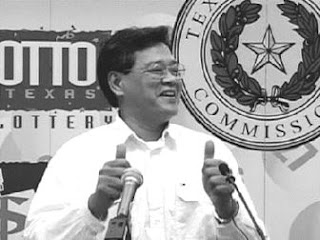 -  Nguyen van Ut in 2004 became the first Mega Millions winner in Texas.  His winning jackpot was $101 million.  He donated some of the money to build a buddhist temple in Duncanville, TX and went back to Vietnam to do charity work.

-  In 2006, eight workers at the ConAgra meatpacking plant in Nebraska won what was at that time the largest lottery jackpot in the US at $365 million.  Two of the workers were from Vietnam - Dao Quang, 56, and Tran Dung, 34.

What Does Ly Tong Want?

Supervisor Dave Cortese, his aide, The Vu Nguyen, Cam Van Le (a board member of ESUHD and a potential 2014 city council candidate, District 7), and Hung Do, a community leader, went to visit Ly Tong on June 8.   The Vu took pictures of Ly Tong shaking hands with the supervisor and meeting with the others.  The pictures can be seen on


In an interview with Cali Today (a local Vietnamese newspaper),  Hung Do said that  the captain in charge took Cortese and the group in a meeting room to talk with a pale looking Ly Tong.   Do emphasized that they could have brought in a cam recorder to record the conversation but nobody did.  Luckily, The Vu had a camera phone so he took some pictures and forwarded them to the Vietnamese-American media.

Cortese asked Ly Tong to stop the hunger strike so that he could be alive to fight another day, especially if he would like people to help him.  Cortese told Ly Tong: "Nobody can help you if you are dead."

According to Hung Do,   Ly Tong said that out of respect for the supervisor, he would take some water but he would not eat.  He asked that the video evidence at the convention from 8:00 PM to 8:15 PM (?)  should be submitted to court for a possible retrial to vindicate his innocent.   Ly Tong, in his latest message on June 9, told everybody that he does not want to be in jail for he is innocent.  He can accept only a probation sentence so that he could be out of jail with a new lawyer to fight for a retrial.

So what is going with Ly Tong at the moment on Day 16?  He is being monitored every two hours by a nurse  and he is staying in a room by himself.  He does take a hot bath everyday but he still refuses food and water.  He is waiting for Cortese to help him getting the film from the convention center.  He promised Cortese that he will not die.   Cortese's office is monitoring the situation closely.
at June 11, 2012 1 comment: Links to this post