A Rendezvous with History

It was quite a week for politcs nationally and locally. Through their determinations, Obama and McCain have made remarkable history. Come February 2009, the country will have either a first African American president or a first woman vice president. Locally, in the same month, Madison Nguyen will either be the first elected Asian American in San Jose (if not California) to be recalled or to survive the recall.

Whatever the case may be, it is safe to say that democracy is healthy and well in the land of free and the home of the brave.

For Nguyen, it would be a bitter sweet ordeal. She is elected to serve the people and now the people have spoken demanding their lawful rights within the democratic process to ask her to step down. She has an army of high power consultants, the powerful Democratic Party, the ever vocal Labor, the mayor, city councilmembers and all the political machinery and lobbyist money to buy her case that she deserves to stay in office.

The people on the other hand are mostly blue collar and middle class voters who stronlgy feel through irrefutable evidences that she only represents the powerful status quo of lobbyists, developers and wealthy influential and powerful people of San Jose.

The people have the right to expect their elected officials to be honest and ethical. Nguyen lied to the people and violated Brown Act, the corner stone of ethical and fair government, to protect a behind the scene deal that she struck with a wealthy developer as a quid pro quo favor.

The people of San Jose deserve better than that. The San Jose voters have a proud history of speaking out with their votes against elected officials who are unethical and unfit for the job.

Fourteen years ago, Councilmember Kathy Coles was recalled for showing disrespect toward the Asian community. Appearantly, Nguyen doesn't recall much about history and heritage. She rhetorically asked the thousands of people supporting Little Saigon why they have so much free time on their hands vs. those that have real jobs.

She is about to have her rendezvous with history and the name Madison Nguyen will live forever in infamy, win or lose her recall election.
at August 30, 2008 No comments: Links to this post 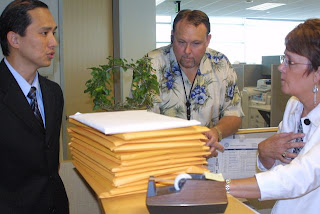 The Madison Nguyen Recall Team surprised everyone with their submission of 5181 signatures to the city clerk office this afternoon, two weeks before the deadline. This is 60% more than the required signatures to force a recall ballot iniative. City Clerk Lee Price officially accepted the signature packages on Friday 8/28/2008 at 1:52 PM.


The Recall Team said they actually gathered closer to 7,000 signatures. However, some of them could not be verified properly. With the team running on empty after a ver 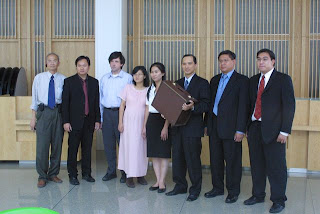 y long exhausting 10 weeks, they decided to have the cut off at 5181 signatures.

From her office looking down to the recall team as they were talking to the media, Madison Nguyen commented: "I don't believe these are real signatures. It is impossible for them to gather these many signatures. Many of them I bet are fake."


The County of Registrar Office will have 4 weeks to verify the signatures and if verified, city council will have to decide on when and what format to hold the recall election. The last recall ballot in San Jose was 14 years ago with Councilmember Kathy Coles removed from office by voters in District 8 for making an offensive comment to the Asian community.
at August 29, 2008 No comments: Links to this post