Dave Cortese over Otto Lee. This is a tough choice with the Little Saigon community leaders supporting Otto behind the scene. However, Cortese has been a part of the community for so long that the name recognition and goodwill will give him the edge.

The community picks Richard Hobbs over George Shirakawa. The choice is easy for the community when Shirakawa decided to side with Madison Nguyen over the Little Saigon issue. This is a toss-up and it will be decided by voter turnout. The Vietnamese-American voters make up about 12% of the total registered voters.

Rose Herrera over Pat Waite. Cortese finally endorsed Herrera two weeks ago. Waite understood the sentiment of the Little Saigon issue. He is very active in the community via monetary contribution and outspoken public support for community's issues. Herrera is a political novice but she is not about the let Pat taking away the crucial swing vote without a fight. She is working with the lawyer Michael Luu to build up a support base to counter Pat's inroad into the community. Pat is hoping that the majority of the Vietnamese-Americans will vote for him and make this a close race. Nevertheless, the number is not there for Pat.

Pete McHugh over Heidi Pham. This is a no brainer despite Pete's really late start in the campaign (Typical of Pete).

Bob Livengood over Heidi's new husband. This is again a no brainer since Heidi's husband is making a mockery of the Milpitas voters.
at October 23, 2008 No comments: Links to this post 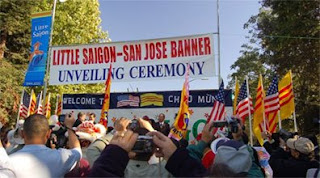 At the unfurling of Little Saigon banners last week, political pundits could see the who's who running for the election on November 4 and beyond.

There was the usual presence of Sunnyvale Councilmember Otto Lee and San Jose City Vice Mayor Dave Cortese. Of course they both are vying votes for the county supervisor race in District 3. Supervisor Pete McHugh was there with the announcement he is running for Milpitas city council. District 8 city council candidate Pat Waite was given a commendation by the Little Saigon Foundation for his monetary contribution and support of the Little Saigon cause. His opponent, Rose Herrera, wearing her Vietnamese traditional dress " Ao dai", was also given center stage. District 2 supervisor candidate Richard Hobbs was on hand to make sure that the people know his strong support of the Vietnamese-American community. His opponent George Shirakawa decided to take the stand against the community with Madison Nguyen. Milpitas Mayor Jose Esteve also made his usual appearance.

Mayor Chuck Reed sent out email to the foundation a week in advance and informed of his presence. Last minute phone call to Reed by his young Vietnamese-American aide, Khoa Nguyen, to warn him that the area was surrounded by recall banners and tables caused a change of heart. The story as told by Khoa Nguyen to the media was that Reed was halfway to the event and then he changed his mind because he did not want to be seen with the recall crowd.
at October 23, 2008 No comments: Links to this post

Politics as Usual In San Jose

First it was the assistant city clerk, Dennis Hawkins, who made the comment while he was being interviewed by the press. The video tape appeared on the Internet video of Vietnam Daily newspaper. Hawkins declared as matter of fact: ".... the city is considering an all mail-in ballot for the Madison Nguyen recall initiative to save money..."

Then the city clerk, Lee Price herself, appeared onVietnam Liberty TV and reinterated the same position.

The community of course was very anxious and up in arm ready to protest against such voting limitation. The term disfranchisement was throwing around in the media and a civil rights lawyer was consulted. After all, more than 7,200 recall signatures were collected even thoug the community only submitted 5,181 signatures. They surely wanted to protect their civil rights granted by the constitution.

Madison Nguyen and Mayor Chuck Reed are well known for having political tin ear but not this time. Immediately they both appeared on Que Huong Radio and declared that they had heard unfơund rumors on the voting process. The city would not deny voters the right to go to the poll to vote.

It was a smart move for thus far a series of disastrous political miscalculations by Madison Nguyen. The fact is that the city has not been very fortunate when it comes to civil rigths matter. A recent civil rights lawsuit against the city in 2003 ended up costing the taxpayers $8.2 million in settlement and an embarrasing forced resignation of the city councilman of District 7. The irony here of course is that Madison Nguyen ended up as his replacement of District 7.

The whole community is waiting for the city to reach a decision on the supposedly Brown Act violation by Councilmembers Madison Nguyen and Forrest Williams. The city supposedly will submit to the judge on October 23 their response. The community meanwhile is pressing for a full trial.
at October 22, 2008 No comments: Links to this post