Phu Nguyen, a new young face,  has announced his candidacy for the 68th Assembly District to replace the term out of Van Tran.

Phu Nguyen is the vice president of Saigon Central Post, Inc. (SCPI), a remittance company serving the Vietnamese American Community.  This is transfer money service from US to Vietnam. Phu is also the CEO of My Vietnam Inc., a company that provides cargo and telecommunications services to Vietnam.


Phu is married to Yen Khanh, a math professor at Santa Ana College. They have an active two-year-old named Christopher and are expecting another child in the spring of 2010.

His list of endorsement reads the who's who of the OC Democratic Party.  The conventional wisdom is that he will win the Democratic primary and face the Republican candidate, Costa Mesa Mayor Allan Mansoor, for the general election in November.

However, his business tie with Vietnam can be an issue with the extreme right wingers in the community.  The question is can he put together a coalition of traditional democratic voting bloc to vote for him.  He will likely get the majority of the Vietnamese-American votes come the general election.

This will be an interesting race no matter what if Phu Nguyen can win the primary.  Allan Mansoor has his work cut out for him.

Lawsuit filed in Santa Clara Superior Court against City of San Jose City Council for violation of the Brown Act by the Vietnamese American community is set to be heard for summary judgment by Superior Court in early Feb. 2010.   The update on the lawsuit can be viewed at:

The conventional wisdom is that the city will likely to settle before the trial because the evidence is very strong against Madison Nguyen.

Not to be outdone by Madison Nguyen, one of her supporters in Southern California, Lan Nguyen, a school board member of Garden Grove Unified School District is in Brown Act controversial of his own.

Lan Nguyen is a right hand man of the Assemblyman Van Tran and is well known in Little Saigon as a hitman for Van Tran against OC Supervisor Janet Nguyen and  Garden Grove Unified School District school board member Kim Oanh Nguyen Lam.

According to the OC Register:

" School board member Kim-Oanh Nguyen-Lam walked out of Tuesday night's school board meeting and has said she will not return to work with the board until they resolve a "Brown Act violation."


Nguyen-Lam alleges that trustees Lan Quoc Nguyen, Bob Harden and George West made a deal among themselves to nominate each other for the ceremonial positions of president and vice president minutes before the start of the Dec. 15 board meeting as they were seated on the dais.


Kim-Oanh Nguyen-Lam walked out of Tuesday night's School Board meeting alleging that her fellow board members violated the Brown Act.


"I was sitting right there shocked and confused," Nguyen-Lam said today. "I couldn't believe I saw what I saw."


Nguyen-Lam said she believes she witnessed a "political conspiracy" to keep her from getting those ceremonial positions."

www.theliberaloc.com/2010/01/06/ggsd-trustee-kimoanh-nguyen-lam-walks-from-meeting-over-lan-nguyens-violation-of-brown-act/
at January 09, 2010 No comments: Links to this post 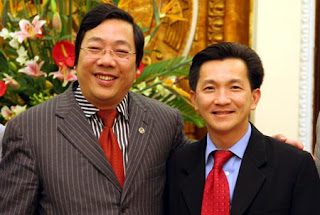 See the breaking news in English on Vietnam Net.

"I am very happy to be back to VN.  In 2001, I had a chance to visit VN.  After 9 years,  I can see that VN has grown tremendously.   I am hoping that our two countries will continue to work with each other."

Last year, Cao visited San Jose and garnered support from the Vietnamese American Community of Northern California.  The same group that was behind the recall of Madison Nguyen while calling her a communist sympathizer.

The irony here of course is that this is the same communist government that would not allow US Congresswoman Loretta Sanchez (D) to visit because of  her human rights and anti-communist rhetorics.

US Census Bureau is Hiring at $22/Hour

The bureau has also opened several local branch offices. Among them are:

A 28 questions test will need to be taken.  A test sample can be taken at:

The higher the score, the better your chance of getting the job.  The government is particularly looking for bilangual speaker.
at January 04, 2010 No comments: Links to this post