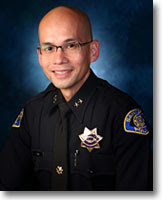 San Jose City Deputy Chief Phan Ngo, 50,  has been selected to be the new chief of Sunnyvale, a Bay Area city of about 150,000 people.   A police veteran for 27 years, he is the first Vietnamese-American to be head of any police department in California.   Phan Ngo is married with 2 children and came to the US when he was 8 years old.    A familiar face of the Vietnamese-American community in San Jose, he is well liked.  A year ago, there was talk of a movement by the community to ask Mayor Sam Liccardo to appoint him the next SJPD chief.

http://www.mercurynews.com/2016/11/21/veteran-san-jose-commander-selected-as-new-sunnyvale-chief/
at December 13, 2016 No comments: Links to this post

It is now official,  Jim Nguyen, candidate for San Jose City Council D8,  has asked for a second manual recount.  In the letter to ROV, he laid out his requests to first review all rejected vote-by-mail and provisional ballot envelopes, all defective or "spoiled" ballots which were remade by Registrar staff during the canvass.   He is also asking to audit all tally sheets to see if there are any discrepancies in the number of ballots.

This strategy is designed to first aim at the weakness of the ROV that was exposed during the recount of the City Council D4 election between Manh Nguyen and Lan Diep.

In response, Sylvia Arenas has also asked for a recount.  This is just a legal maneuver to give her an option if she needs  (since the deadline to ask for any recount is today) and put on notice that she will challenge any unfavorable decision made by the ROV.

LSI thinks that this election will likely be dragged to court similar to what is happening with D4.