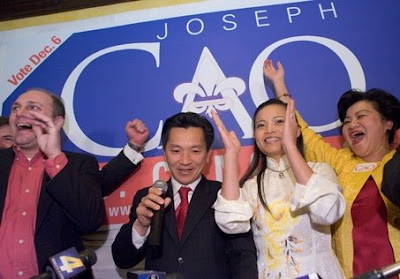 In a stunning upset, a relatively unknown Vietnamese-American lawyer, a conservative Republican, won a special election for Louisianna US Congressional 2nd District. He will represent a district that was specifically drawn to give African-Americans an electoral advantage and one in which two of every three voters are registered Democrats.
US Representative William Jefferson has represented the district since 1991 but is now facing corruption charge when investigators found $90,000 cash in his freezer and linked him and several relatives to a wide-ranging bribery scheme. He was the first black Democrat elected to Congress from Louisiana since Reconstruction. The Lousianna 2nd Congressional District has 65% Blacks to 30% Whites voters.
Anh "Joseph" Cao came to the US when he was 8 years old and typical of all Vietnamese-Americans in New Orleans, a devout conservative Catholic. New Orleans and vicinities have about 18,000 Vietnamese-Americans. This rerepsents less than 2% of the population. Joseph Cao has never held any public offices but running for US congressional seat, it is never a criteria. Cao graduated from Loyola Law School in 2000 and works as an immigration lawyer. He had served on the board of Boat People SOS, a nonprofit foundation located in New Jersey. Cao is married with two daughters.
He is a parishioner of the Mary Queen of Vietnam Catholic Church. The same parish that Bishop Mai thanh Luong of Los Angeles Diosce, the only Vietnamese-American bishop, used to reside as a parish priest.
Cao won the election partly because of an extreme low turn out. Last month, nearly 164,000 Democrats and independents in the 2nd District cast ballots. Even with the universe of voters expanded Saturday to include all registered voters, only 66,846 showed up to the polls. At this writing, Cao received 33,122 votes while Jefferson garnered 31,296 votes.
Cao raised almost $90,000 from a slate of party operatives, local executives and members of the Vietnamese community. He also pumped $70,000 of his money into the campaign.
This is a no doubt a historical moment for the Vietnamese-American community.
Cao won because of his perfect timing but also his appeal across the racial line. Whether he can win the re-election in 2010 is still questionable since the Democrats let their guard down with a flaw candidate in a special election.
Nevertheless, with Republican Janet Nguyen won her Orange County supervisor race in 2007 and again 2008 in a heavily populated Democratic and Hispanic district, it shows that Vietnamese-American politicians have the skill to reach out and win in unfavorable demographics.
at December 06, 2008 3 comments: Links to this post 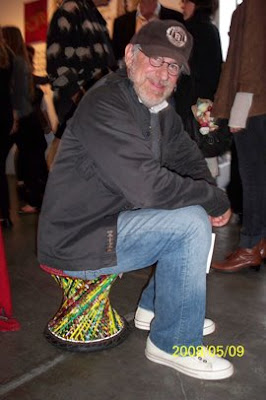 In 1997, Marichia went to Vietnam as tourist and was captivated by a group of young people working in a restaurant in Hanoi but using their spare time to make picture frames out of recycling soda cans. They would sell them to tourists to pay for their college education. She told the young students if they would send her the frames she would sell them in the states. Any money she made would be sent back to VN.
Four months later she received 300 hundreds picture frames. Marichia was stunned and did not know what to do with the frames. However, true to her word, she managed to sell them all to her TPA, neighbors, friends. What made the story very compelling was the fact that the students only kept a small amount of money sent for their education and the rest was given away by them to support orphans in remote villages.

From such kind acts ocean apart came forth Spiral Foundation. In the last 11 years, Marichia raised over $1.3 million for her nonprofit organization by selling crafts made by recycling materials from disadvantage artisans first in Vietnam and later on Nepal. Marichia would display the bowls, the bags, and other housewares on her dining room table, called it a holiday gift bazaar and invited neighbors and friends to come over. Word of mouth did the selling and marketing. Now it has grown into an annual event attracting the Hollywood crowd.

Some of the money are being used to fund educational program as well as healthcare/surgery for children in Hue via East Meets West Foundation, a nonprofit foundation founded by Le Ly Hayslip in the early 90s. Le Ly Hayslip of course is famous for her book about her life as a woman in a war torn Vietnam which later was made into the movie " Heaven and Earth" by Oliver Stone. East Meets West Foundation is the largest NGO operating in Vietnam with an annual budget of over $5 million.