Voter Speaks Up about ROV and Recount Debable

To: Santa Clara Board of Supervisors
Re:  Serious errors/flaws uncovered during the automatic recount of the San Jose City Council District 4 election

As a concerned voter of Santa Clara county and on my own behalf, I’ve written many comments about the sloppy operation Registrar of Voters (ROV), especially in the ballot duplication aspect, which raises serious doubts about the outcome of the San Jose City Council District 4 race, an extremely tight race with only 28 votes between the candidates, out of 17,350 votes for the candidates.

It does not matter to me who wins or loses.  It matters to me a great deal that we have an election system whose work and published results we can trust.  Complaints about the ROV have been raised in the past, but it was not until this recount that we have concrete data to substantiate our concerns.

There are still many unresolved issues.  A precinct‐by‐precinct analysis shows over 200 votes are missing between the original count and the automatic recount.  The ROV offers no explanation for these missing votes.  Instead, the ROV try to distort the number of ballots counted during the automatic recount, claiming in its report to the Board that the recount encompassed 20,334 ballots when it only counted 20,079 ballots (as proven by tally sheets and ROV’s own report).  There are 10 illegal votes because 5 people double‐voted.

Dozens of original ballots and duplicated ballots are missing. The most serious violation is in the ballot duplicating process, which include ballots being duplicated twice giving one candidate unfair lead, staff initialing for one another or not initialing at all, altering and forging of initials, even during the employee’s absence.  About 97% of the 280 challenges logged in during the recount were related to staff initials.

Below, I am providing some examples of the original and duplicated ballots for your review. Of most concerns are the following:

- a ballot where the original has different markings in different ink, like someone just quickly connected the arrow for Lan Diep before duplicating the ballot

- ballots where staff initials were altered.  we witnessed (during the recount) an ROV staff member who was very concerned  when she found her initials but not in her handwriting.

For these reasons, we urge the Board of Supervisors to not accept the ROV’s report because it contains wrong information (claiming that the recount counted 20,334 ballots when it only counted 20,079 ballots).  We also urge the Board to nullify the certification of the election results and the outcome of District 4 until after the Board fully investigates ROV’s wrongdoings.  And please keep the recount because it helps make ROV accountable to the county, and the voters.

Thank you for your leadership in ensuring that we have a fair, honest, transparent, efficient and accurate election system.

Why Manh Nguyen Is Taking on ROV? 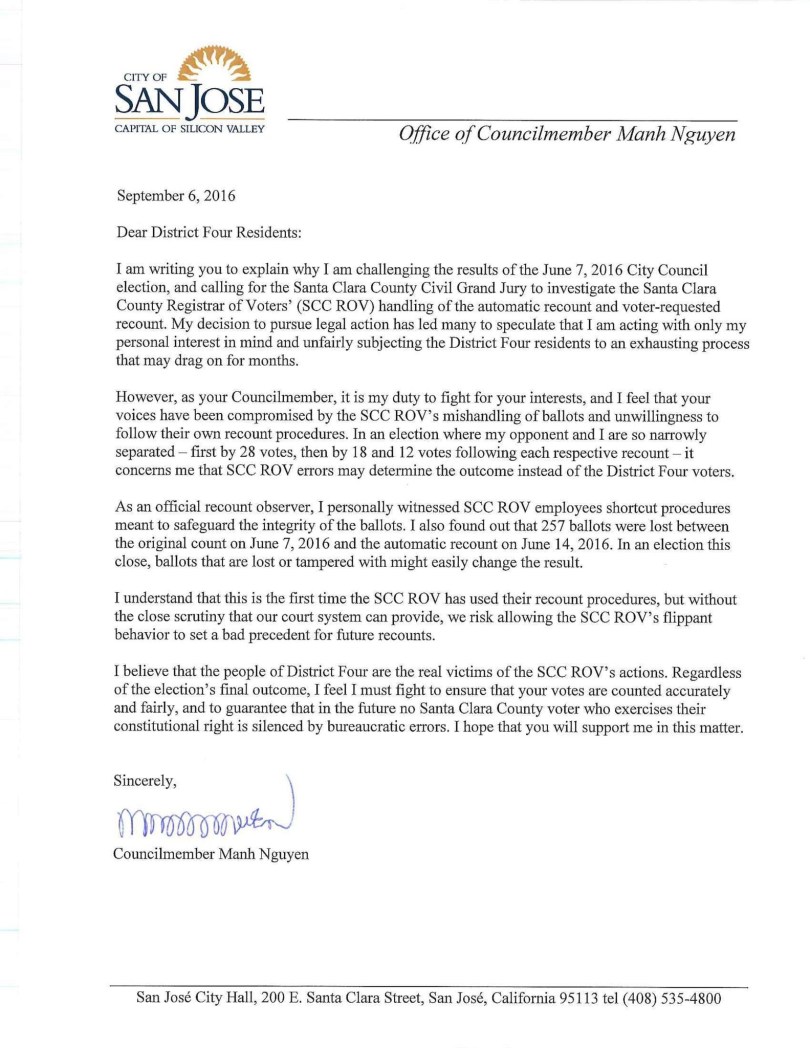