With the campaign heading into the final two months,  Jimmy Nguyen's lack of campaigning experience is glaring.   Many of his supporters are concerning about his efforts and his inability to raise money.

He tries his best to rally the Viet - American community to help him with money.  His all out support of  the convicted felon Ly Tong has gained him admiration of  the extreme anti-communist crowd but has hurt him with the more main stream Viet-American voters.

The whisper among his Viet-American supporters is that this election is good for Jimmy to get some public exposure so that he can run for District 7 to replace Madison Nguyen in 2014.  This is something that has crossed his mind no doubt.

District 7 is wide open in 2014 with 35% of the voting block is Viet-American.   A candidate like Jimmy Nguyen has a very high chance of winning.  Of course, Cam Van Le, a schoold board member, is also thinking very outloud about running for the seat.   She is actively scoping out who is running for the seat.

LSI cannot wait till 2014 to see the contest in District 7 to replace Madison Nguyen.    Of course, Nguyen has made it known in the Viet-American community that she is running for mayor in 2014.

She hopes to sneak in between two white male candidates who are rumored to be in the running also - Dave Cortese and our dear friend Sam Liccardo.   She is hoping for the female votes and some of the Viet-American votes.   Would it be enough to get her into the runoff? 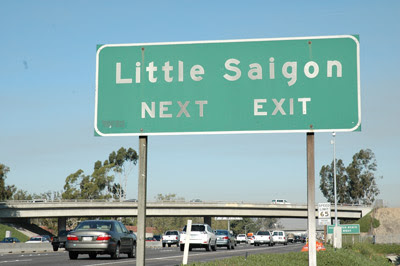 For those who are keeping score, the proxy war between San Jose City Councilmember Madison Nguyen (and her mentor, Mayor Chuck Reed) and County Supervisor Dave Cortese is being fought bitterly in the open in the Vietnamese-American community.

Yet it is only 2012.   It is no secret that Cortese and Nguyen will be vying for the San Jose mayoral seat.   Dave has been very active in catering to the Vietnamese-American community.   After all, they will make the difference who will be in the runoff.

Cortese has two main projects this year to help win point with the Vietnamese-American voters.  They are:

1.  Attaining the highway sign " Little Saigon" to highlight the business district named Little Saigon.  Even though it is not offically recognized by the city planner but the monument and banners are allowed to be displayed.

2.  Securing a plot of land in the county for a Vietnam War Veteran Memorial statute


Cortese, with the help of Assemblymember  Nora Campos, had sponsored a bill (AB 2095) to allow DOT to post 4 "Little Saigon" signs along HWY 101.   The bill was allowed to expired recently since  at the recent hearing of the Rules and Open Committee, both Reed and Nguyen restated the fact San Jose City does not official recognize the Little Saigon name and therefore would neither support nor reject such bill.     For the supporters of having such signs, it means that they will have to wait for another 2 years when a new set of elected officials might be in their favor.


However, Cortese will have better luck with the Vietnam War Veteran Memorial since he has more control.   The county supervisors in principal have no objection to designate a plot of land within the county building grassy area for a bronze statute of a Vietnamese and an American soldier  to commemorate the Vietnam War.    The final approval is still needed but Cortese has been instrumentally in shepherding the whole process, including selecting the groups within the community to lead the project.   Now it will be up to the community to unite and raise about $400,000.    According to the plan, the county will take ownership of the statute and provide maintenance of the memorial.   With the success of this project,  Cortese will have a leg up on Madison.


Now for a tie round,  it is the Mid-Autumn Festival.  Both Cortese and Nguyen are sponsoring their own event on the same date.    Cortese is helping a large Mid-Autumn Festival in the Santa Clara County Fairground.  It will be an all day event with major entertainments from Orange County along with a health care fair.    Nguyen is promoting her own event at Kelley Park from 4:00 PM to 8:00 PM.
at September 05, 2012 No comments: Links to this post

Jimmy Nguyen and His Rousing Support for Ly Tong 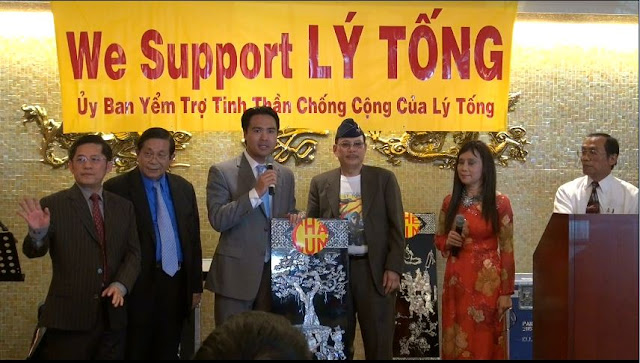 In the last two weeks after Ly Tong's release from prison,  the Little Saigon community has been seeing him being accompanied by the District 8 city council candidate Jimmy Nguyen.   At an event to raise fund to support Ly Tong's effort to counter sue the county for wrongful conviction (as Ly Tong maintained),  Jimmy even showed up and gave a rousing speech praising Ly Tong as a hero of the community.   He even donated $500 to the cause.

The community understands Jimmy Nguyen needs the votes but to some people,  this is a little too desperate to claim that Ly Tong is a hero.
at September 05, 2012 1 comment: Links to this post