Is Quang Pham for Real? 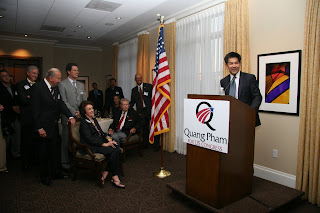 Quang Pham is a well known figure in the Vietnamese-American community for his autobiography about his journey as a young boy growing in America and ultimately served his country as a Marine pilot fighting in the first Gulf War. He is also an entrepeneur building successful businesses in the health care industry.
The event was packed with his supporters including some of the who's who in OC - Rod McDermott, managing director of the McDermott and Bull (A high power recruiting firm) and a New Majority member, Gen. William Lyon, real estate magnate and heavy-weight GOP donor, Tom Davin, president the Panda Restaurant Group, Robert Mosier, president and CEO of the Mosier & Company, etc..

Pham also announced at the event that he so far has raised over $100,000. This is impressive but his goal is to raise much more in order to have his run at the Republican primary first against State Assemblyman Van Tran.
He is having two additional fund raising events in Philadelphia and Washington DC this week alone.
In the last 3 months after his candidacy announcement, Quang has been working hard to build a team and raise money. He has the name recognition and goodwill in the Vietnamese American community and within the business world. However, similar to Van Tran, his name recognition in CD 47 is limited.
The conventional wisdom is that in the Republican primary, Van Tran will have a big advantage especially with his Vietnamese American constituents. The reality is that Van Tran is a controversial politician within his own Vietnamese-American community and mainstream. His continous personal attacks on County Supervisor Janet Nguyen for last two years as he tries to consolidate his political power has earned him the nickname of the "Godfather" and his political machine as the "Gang of Seven". His recent controversy with the Andy Quach's DUI episode garnered him the headline in the mainstream media as well local Vietnamese-American media: " Van Tran Interferred with Investigation".
But what is more damaging to Tran in the Vietnamese-Ameircan community is him receiving of a lof of money from wealthy businessmen who have close tie with the communist government. There are a lot of questions being raised.
This is a long race from now until June 2010. Both Van Tran and Quang Pham are raising money furiously to prepare for the firework. Van Tran is well known for his viscious politcal tactics so the question is does Quang Pham have what it takes to take on the "Godfather" and his gang?
at September 13, 2009 1 comment: Links to this post