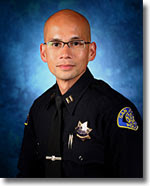 Captain Phan Ngo, a commander in the San Jose Police Department, has been promoted to deputy chief.  San Jose is a city where only 1/3 of the population is white, Captain Ngo is the only ethnic deputy chief.  The other three deputy chiefs are white.  The police chief and assistant police chief are also white.
The Mercury News noted that:
"And with the promotion, San Jose Police Department ceased to be a major police department with an all-white, all-male command staff. The San Francisco Police Chief George Gascon is a Cuban-American and his Deputy Chief David Shinn is Chinese-American. Oakland Police Chief Anthony Batts is African-American, as is his assistant chief. One of Sacramento's deputy chief is a Chinese-American. The Santa Clara County Sheriff is a woman, Laurie Smith; her undersheriff is John Hirokawa, a Japanese-American."

In a period of incredible tension between the Latino and Asian communities (particulary the Vietnamese-American community) for a number of alleged police brutality cases, this is considered to be a positive sign by many community activists.
The Mercury News commented:

"His selection also comes at a time when some in San Jose's sizable Vietnamese population distrust the police because of two controversial cases — the police shooting of a mentally ill Daniel Pham in the backyard of his home, and the violent and videotaped arrest of San Jose State University student Phuong Ho. Ngo also becomes the only non-white in Davis' top command staff, filling a job that has been open for months"
http://www.mercurynews.com/top-stories/ci_14297961
Phan Ngo joined the SJPD since 1989 and became a captain in 2008 and had served as  a commander since.  He came to the US in 1975 when he was 8 years old.  His father, as soldier, died during the Vietnam War.


In related news, Assemblymen Joe Coto (D) and Paul Fong (D)  have asked the State Auditor Elaine Howe to investigate the SJPD.  The ground for investigation is their concerns on whether the police force is properly train and procedure for handling police abuse is adequate
at January 29, 2010 No comments: Links to this post