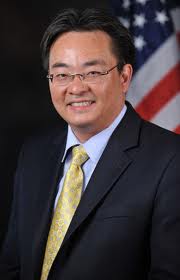 It seems that Joe DoVinh has made up his mind for now to run for the newly created Assembly District 72nd seat in next year nonpartisan primary.  He will be running as a Democrat against at least 3-4 more candidates.  One of the candidates is of course Tyler Diep Truong (R), a Van Tran's disciple or "The Trannie" as the main media would refer.  Joe DoVinh is a court translator and used to work for Viet Star, a small local tabloid in Little Saigon.

Since this is nonpartisan primary, anything could happen.   Joe DoVinh is banking on the fact that Tyler Diep Truong is a controversial candidate in the eye of the mainstream and has a high negative in the Vietnamese-American community.   With the usually strong turnout of the Vietnamese-American voters,  he hopes that they will choose him instead of Truong and this will be enough to carry him at least to the run-off.    He gave Phu Nguyen (D) a run for his money in the democratic primary for the 68th assembly district last year without even putting in any effort.   And Phu Nguyen was the darling of the Democratic Party with all the supports of the unions and political heavyweights.

Joe DoVinh is a smart candidate and knowledgeable journalist and he understands the sentiment within the community.   It is very clear that they are still sick and tire of the Trannie.  Tyler Diep Truong has a job cut out for him to distance himself from Van Tran even though he still needs Tran to help raising fund.   Joe DoVinh can run as a "Anti-Trannie Candidate" and most important of all, a fresh breed of  candidates free from the shenanigans and gangster-like politics of Tyler Diep Truong and Van Tran.

However, Little Saigon politics is unpredictable.   As mentioned at the beginning of this article,  Joe DoVinh for now is planning to run.   However,  Van Tran and his cronies will likely try their best to cut a deal with Joe DoVinh.  Little Saigon insiders are already whispering the possibility of Van Tran buying Joe DoVinh out  - How about some ad money to support your newspaper so that you would not run?

It is unlikely that Joe DoVinh will back down for he understood that this is his biggest chance.  After all, this is race where everybody is a wild card in the primary.  And if Joseph Cao could beat the odds in 2008,  why couldn't he?  Fortune will lie with those who take chances