With less than a month left for the special supervisorial election in Santa Clara County to replace the disgraced Shirakawa,  both Alvarado and Chavez are working hard to win the Vietnamese American votes.

Last week, at the Viet Voters' headquarters, there was a debate arranged by the Viet Voters for both candidates.   Most people attending the event agreed that Alvarado came out as a more trustworthy and likable candidate.    Of course, Cindy Chavez and Labor Unions were campaigning against Viet Voters in their support of Madison Nguyen in the 2008 and 2010 elections.   Viet Voters was the group that organized the recall and rallied the community support for Minh Duong's candidacy.

But in politics, there are no enemies, just convenient friends.   Cindy Chavez now claimed to be duped by Madison Nguyen and completely disassociated herself from Nguyen.   She is relying on SC Supervisor Dave Cortese to get herself a foothold with Viet Voters.

She is also quite supportive of San Jose attorney Tam Nguyen and vice versa.  Tam Nguyen is a long time community activist and earlier this year, he delcared his candidacy for city council to replace Madison Nguyen in 2014.   Tam Nguyen right now mainly receives his support from Viet Voters. 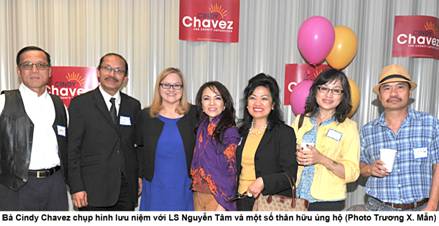 Meanwhile, Alvarado with her new cadre of consultants, also keeps her distant from Madison Nguyen.  In the primary, she wrongly thought it would be to her advantage in receiving Nguyen's endorsement.  Now she finally understood that the Vietnamese-American voters are staying away from her because of  Madison Nguyen.  Unfortunately, they will be the swing votes that will determine this race and she is clueless on how to approach them.

LSI is predicting that Chavez will win this election decisively.