Madison Nguyen and Her Toxic Endorsement

LSI learned that Vice Mayor Madison Nguyen was quite eager to offer her endorsement to the second place finisher of the recent San Jose mayoral race.   However, the offer was politely turn down for now.

It just happens that Councilmember Sam Liccardo is an astute student of political history.   He knows how Nguyen's endorsement of Teresa Alvarado  in last year Santa Clara County supervisorial race riled up  the Vietnamese-American voters and they turned out to vote in drove and gave the now Supervisor Cindy Chavez the necessary vote difference.

A lot of people in the Vietnamese-American community felt bad for Teresa for she is a nice and decent person.  What did her in was her naivete to the sentiment of the  Vietnamese-American community.   Blanca Alvarado (the a well respected former supervisor of the same seat) sensed her daughter mistake and in the end was personally asking the Vietnamese-American leaders to help her daughter.   But it was too late and Nguyen's polarizing reputation damaged the campaign to a point that the Alvarado staff could not attract Vietnamese callers and walkers to help with their race (despite the fact that they offered $10/hour for the service).

This week election for mayor and city council,  Buu Thai was another candidate as the unfortunate recipient of Nguyen's endorsement.  On the surface, with strong name recognition in D7 for her work in the last 8 years as a school board trustee and Nguyen throwing her weight behind her,  the conventional wisdom was that she would at least come in second place.  In reality, she was dead last.

Liccardo knows that this will be a tight race and he is fighting an uphill battle against Dave Cortese.  He does not need another reason to motivate the Vietnamese-American voters to support  Cortese.  But on the other hand,  Nguyen can be a very persuasive and in the upcoming mailer,  there might be a picture of Liccardo and Nguyen together urging the Vietnamese-American voters to vote for him.

Orange County Supervisor Janet Nguyen (R) won her state senatorial race with ease.  She received 54% while her nearest competitor, former Assemblyman Jose Solorio (D), garnered 31%.  This is a seat that the Republican Party wants desperately and Janet Nguyen is their woman.   With a weak candidate and low Hispanic turnout as predicted, Janet Nguyen will again face Jose Solorio in the runoff.  She will be a strong favorite of course for this is a partisan race and this is the year voters will lining up for the Republican Party to show their disapproval of Obama.


In San Jose, the lawyer Tam Nguyen won his city council race for D7 with 34% of the vote.   Maya Esparza will be his opponent in the runoff this coming November.  She received 28% of the vote. 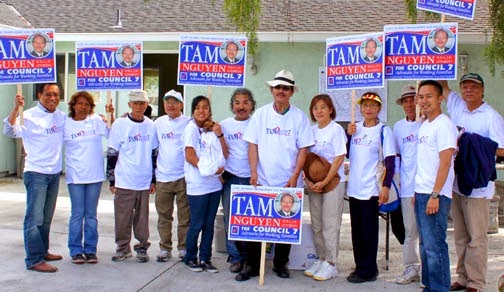 Tam Nguyen was dismissed by the Mercury News Editors as a community activist with no experience.  The scathing put down of him by the editorial as somebody who does not know how  government works and worst of all, the Mercury News Editors did not bother to mention the fact that he is a practicing lawyer for over 20 years.  Interestingly enough, he won a lawsuit against the Merc in 2000 for plagiarism.  The Merc was ordered to pay him $20,000 for the damages.

Buu Thai, school board trustee and with a shining endorsement from Madison Nguyen,  came in dead last among the four candidates.

It is interesting to see how Tam Nguyen will fare now that the other two Vietnamese-Americans are out of the race.   He is a hard campaigner and has the skill sets and experience to bring the voice of the D7 people to city hall.   This is something that Madison Nguyen was unwilling to do. 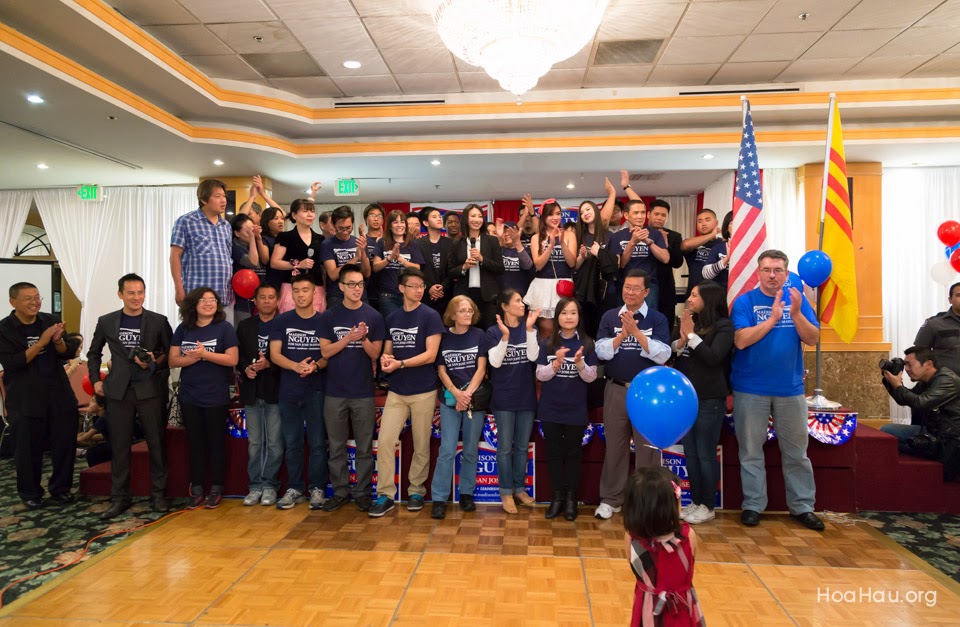 And then there is Councilmember Madison Nguyen and her mayoral race.   She told her Asian supporters that she would get 90% of the Asian votes.  This is quite significant of course since they are 1/3 of the demographics.  She came in third with 21%, Sam Liccardo is second with 25%.   Of course, Dave Cortese, the favorite from the start, won with 34%.

Dave Cortese put together a strong coalition of Asian, Hispanic and White.  He is also very favorable among female voters.   His campaign calculated that Cortese  should be able to carry D10, D9, D7, D8, D2, D5 and D4.   It is too early to have any concrete numbers to analyze.   However, in the runoff, it is not far fetch to say that Cortese will carry these 6 districts.

Sam Liccardo will have the money and Madison Nguyen will throw her support behind him, as well as Mayor Chuck Reed.   However,  it will be a tough hill to climb with 9% separating him and Cortese.  Also, in the last 2 elections, whoever Nguyen publicly supported, they would end up loosing.


It is too early to predict but LSI has the gambling bug the last couple of days.  The early conventional wisdom is that Dave Cortese will be the next mayor and Janet Nguyen will be the first Vietnamese-American to be elected California State Senator.