Where Was Our Humanity? Many people see the SJPD beating of the San Jose State student because he is a Vietnamese/Asian/ member of an ethnic community without any weapon and in a position to defend himself, and not because he was from Vietnam or from San Jose. It could have been any of us. When see the videotape and hear Ho’s cry-for-mercy, it sounds like a human being just like anyone regardless of who they are and where they came from. Thus, I see that beating from the perspective of a member of the human family. One could ask whether the police's motivation was from self-defense, disrespect, anger, or hatred toward this student.


For the past 6 years since the 95-pound mother of two toddlers Cau Tran killing until the most recent mentally-ill Daniel Pham killing by the SJPD, I did not see our chief of police or the police department leadership reach out to the Vietnamese American community or the victims’ families in any meaningful way.

At least the name of the Cau Tran's shooter was released, the Daniel Pham's shooter's names were kept secret and were not made known until the no-indictment information, several months later. So, public information became more secretive. It was an open grand jury for Cau Tran's killing, and it was a closed grand jury for the Daniel Pham's killing. Transparency has become a thing of the past. SJPD police on July 13, 2003 killed Cau Tran with one bullet in the safety of her own kitchen. On May 10, 2009, they killed Daniel Pham with 12 bullets. Is it self-defense, or is it hate that these police pumped 12 bullets into this person in his own backyard?

I am one of those who are concerned about the quick erosion and loss of many residents’ trust in our police or the leadership for what they say, what they do, and how sincere they are in what they do and say in relation to what they have done.

The voices of residents of all ethnic groups calling out for help at City Council meetings in the past two years have reached a conclusive level of how many residents’ lives and career opportunities have been deeply damaged due to racial profiling, wrongful arrests of public intoxication, excessive force and beatings against young people / mothers and fathers of young children, and most recently the video-taped cry-for-mercy from a San Jose State student. The call for thorough investigation was made only after pressure from the community and the Mercury’s October 25th exposure of the video-taped beating of the SJSU student that took place nearly two months ago.

How many more incidents never saw the light of day because they were not brought to the public’s attention or were "not known" by the leadership? How credible is the police investigation of themselves (or the DA's investigations regarding SJPD police shootings in the past) especially when they found that none ("ZERO") of the arrest complaints in 2008 was sustained or had any merit? For the police, is "Zero" an improvement from less than 2% sustained complaints in the 117 (2 out of 117) complaints filed in 2007? When the average should be 8%? Why 82 percent of those arrested are ethnic minorities? (Information according to the Mercury News findings, November 1, 2009).

Should we accept that ethnic minorities could expect to be more disrespected and abused by our police? We should not have to cry for mercy from those who are paid to instill a sense of safety, trust, and respect whenever they are near us.

If we want to know how the next years will be, one of the most reliable indicators is to look at how the past 5 years have been.  If you were not invited to meet and confer in the past 5 years, be thoughtful. Maybe you were not that important to a system that is in principal designed to serve and protect at the interest of the public.

Should our children or members of our community be beaten and victimized by authorities (e.g., police) after being bullied by others (Jeremy Suftin, the friend of the beaten SJSU student) may be because one is a member of the minorities, whether in school or out of school? Many of these victims of police abuse by excessive force have to defend themselves for charges such as "resisting arrest" and all kinds of additional charges. Aren't these afterall Human Rights and Human Dignity issues?

Who knows who the next victims will be? It could be anyone of us if we still think I am too good to be treated like that.

Thanks to our good cops, and many of us have friends who are cops. It's the bad cops that made many of us fearful of them all. Unfortunately, the record shows that they have been in good hands: "Zero complaints sustained in 2008!".  "$861.000 settlement!"

We hope our elected leaders can help repair the damage of community's trust (and respect). We all deserve it.

Could this be the defining moment for San Jose community, and more importantly its leadership so that we can know how to answer if one day our children ask: Where was our humanity?

The article is written by Sam Ho, a long time San Jose resident.
at November 21, 2009 No comments: 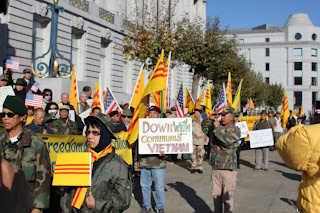 About 500 - 600 Vietnamese-American protesters demonstrated in front of SF City Hall last Sunday in protest of the Meet Vietnam conference.  This is a business and cultural event took placed on November 15 and 16 in San Francisco to promote Vietnam and strengthen relations with California in trade, investment, education, tourism, science and technology. The event was held in City Hall and at the InterContinental Hotel.

There were about 350 - 400 people, mostly Vietnamese-American business people and investors, attended the event.  The banquest dinner was at SF city hall but the main investment meetings and reception headed by Deputy Prime Minister Truong Vinh Trong were held at the InterContinental.  The music show on Sunday evening was well attended with singers and performers flew in from Vietnam. Well known singers like Tran thu Ha as well as recent winner of VN Idol were big hits with the audience. 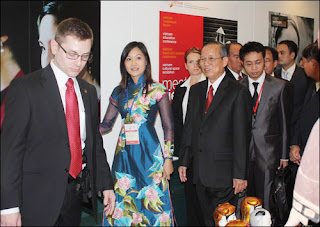 Deputy Prime Minister Truong also met up with the Vietnamese-American Entrepeneur Association (VAEA).  The association is headed by Nguyen huu Liem, Ngo Hua and Vu Ngoc Trac.  Nguyen huu Liem, a lawyer,  is infamous in the community for his support of Madison Nguyen against the naming of Little Saigon in San Jose as well as his close tie with the communist government.

At the reception, in reference to the protesters, Victor Duong commented with laughter: " The extremists missed the boat and demonstrated at the wrong place".  Victor Duong along with his brother David Duong are owners of California Waste Solution.  They are a big donors to State Assemblyman Van Tran and Madison Nguyen.  Recently, both brothers gave Van Tran $9,600 for his congressional bid in 2010 against Quang Pham, an ex-marine pilot.  Both brothers own real estate and recycling business in VN worth about $65 million.
at November 17, 2009 No comments: