The day started out with the Little Saigon community gathered in City Hall to ensure that the council hear their argument for having one single election for both recall and replacement ballots. Under the guidance of the city attorney, all councilmembers voted to set March 3 as a recall election date and if Nguyen is recalled, the council will reserve the option of appointing or calling for a general election.

The crowd filed out disappointed and totally missed the political acknowledgement to the community by Reed as well as councilmembers who have supported Nguyen. It was one of the hardest votes for him as his senior staff would later shared.

Later in the evening, the community gathered to celebrate Dave Cortese's victory. Over at Pete Mchugh's victory party, it was a sweet confirmation that unqualified Vietnamese-American candidates would never get the votes of the community.

The community is burned badly over Madison Nguyen and they have vowed to only support qualified and proven candidates. Losing candidates like Heidi Pham, Khoa Nguyen, Vance Vuong and Kathy Tran either are unknown in the community or have not been a part of the community period. These candidates were also unprepared and naively thought that by having a Vietnamese last name, they would automatically have the support of the community

It would have been a much better day for the community if Pat Waite would have won but the race is too close to call and will take at least two more days to determine. There is a good chance that there will be a recount. However, at the end of the day, whether it is Rose or Pat, they have gained two very good friends.

The real winner of course is a well known lawyer and developer in the community. His even handed approach and fair play show that he is a voice of reason that the political mainstream can rely on. Well, his money and ability to raise a lot of cash may have a lot to do with it too.
at November 05, 2008 No comments: Links to this post 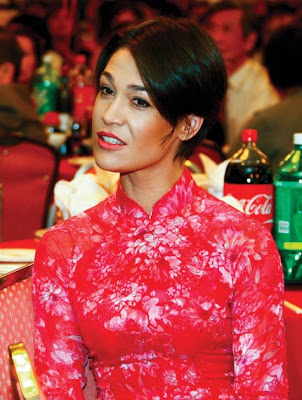 While the Recall Team was having their coming out party and celebration on 10th Street with over 1,500 people in attendance, about 700 people showed up for a fund raising event for Miss Tim on Story Road.

While 7 elected officials and candidates took the podium and spoke defending the recall process as well as why Madison Nguyen should be recalled, at the other end of District 7, Miss Tim spoke in her soft and no-accent Vietnamese about her hopes and dreams.

Miss Tim (or Miss Heart) is a Vietnamese given name for a beautiful Swiss lady, Aline Rebeaud. In 1992, as a young art major backpacking in Vietnam, she heard a whimpering cry of a 10 years old orphan lying in hunger on an empty street of Saigon. The child was too weak to walk so she carried him to a safehouse and helped fed him. It was that moment that made her decided to further investigate the poor and homeless kids in VN and ultimately made the decision to stay to make a difference. For the last 17 years, she took in homeless kids and handicapped kids and raised them in a building she called "Masion Chance" or "House of Chance". The building is in Saigon, the former capital of South Vietnam (Now known as Ho Chi Minh City). Maison Chance is a well known landmark among the Viet expatriates returning to Vietnam for visits.

When asked how many kids have she helped, she replied : "About 700 kids". Some have grown up, have jobs and have kids of their own. Tothem, Miss Tim is the mother they never had.

She is currently visiting the US for the first time to raise money to expand her Maison Chance. It was a delay visit for she was recovering from a terrible accident that almost ended her life. In San Jose, despite economic hard time, the Vietnamese-Americans responded with over $110,000 in two nights of fund raising.

In the US alone, there are about 3 dozens registered nongovernmental agencies, founded by Vietnamese-Americans, actively working in Vietnam. Each year, they contribute millions of dollars to many educational, environmental and health care projects in Vietnam.