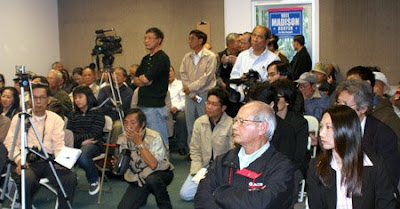 Last Saturday, at her new campaign headquarters in a building leased by Huong Le, the younger brother of Chieu Le (Lee's Sanwiches owner) who embarassed himself with false claims against the community in front of the city council, Madison Nguyen put forth an event to release her DVD.

The DVD is about her great accomplishment for the community in the last three years in office. There were about 57 people attending the event including the press and Nguyen's staff. At one point, it was emotional as her dad made an appeal to the community asking the community to help "correct Madison" if she made any mistakes.

The community is still not forgeting how Madison referring the Little Saigon supporters as "do nothing unemployed people" and calling the many rallies for Little Saigon as "nothing but a circus act".

Back in the crowd, her paid supporters like Viet Weekly (which pulled it newspaper presence in San Jose after getting downsize by the community in its hometown of the original Little Saigon), was walking about encouraging the 2 dozen people in the crowd to speak up for her. The guy with glasses kneeling in the picture is the owner of Viet Weekly who called himself Le Vu (LSI is not in the business revealing people's true identity and background). He drove all the way up from Santa Ana for the event.

This begs a point, why there are so many people from outside of San Jose supporting Nguyen?

From her 460 filing updated at the end of September, 80% of her money came from big businesses and labor unions, some as far as Washington DC, San Diego, Sacramento, San Francisco. Phoenix, Las Vegas, ect... The list is very impressive especially with the big name real estate developers and lobbyists.

She has raised so far $114,812 and spent $92,783 to thwart the signature gathering effort. She has now just about $22,030 left in her account. According to people inside her camp (specifically Viet Weekly), she is worrying that she might not be able to raise additional money, especially now with Mayor Reed abandoning her.

In a media war, she spent over $55,000 for all the radio ads, news articles and mailers, trying to deny the signature collecting effort. Of course, there were the consultant fee, the legal fee and the staff fee, that added up to another $19,000 or so. The problem for her is that she does not have a volunteer staff at her disposable. The passion is simply not there for the people in her District 7. But it is sure still with the people from out of town who basically are either being lied to by Nguyen or just wanted to see a good fight while getting paid. Capitalism at its best.

Her ability to raise money so far is amazing with all the out of town contributors.
Matter of fact, she raised almost twice the money than the recent winner of District 8 city council race.

The question is can she raised another $100,000 to keep her hope of retaining her seat?


Footnote: The Recall Team is planning a two day fund raising event next weekend with over 1,200 tickets pre-sold at $35 at ticket. The are expecting about 1,500 people at the two days event.
at November 28, 2008 1 comment: Links to this post 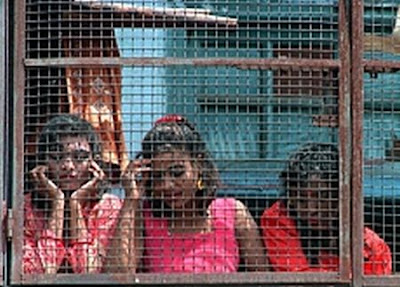 On Sunday, December 7th, 2008, from 11am - 1pm, VA-NGO Network (Vietnamese-American Non-Govermental Organization Network) will be holding a forum on the topic of trafficking of human beings (THB) in Vietnam.

It will be an open discussion to achieve the following goals, but not limited to:

Encouraging NGOs to explore opportunities to collaborate with each other and with the VA-NGO network on anti-THB projects or a component of the project when possible.
Assisting VA-NGO Network to explore and define its roles in working on anti-THB and assisting different NGOs to further their anti-THB project objectives.

Forming an anti-THB working group to further define objectives as discussed and agreed upon in this forum.

For organizations and individuals who are already working or plan to implement new anti-THB project, you are cordially invited and encouraged to attend this open discussion on the topic of trafficking of human beings. Your inputs will be invaluable to this process and will allow us to have better and collaborative strategies to work on this daunting issue in Vietnam!

Footnote: Human Trafficking is a crime in the US. The DOJ estimates there are 50,000 people annually being trafficking in the US. According to the DOJ:

Trafficking in persons — also known as "human trafficking" — is a form of modern-day slavery. Traffickers often prey on individuals who are poor, frequently unemployed or underemployed, and who may lack access to social safety nets, predominantly women and children in certain countries. Victims are often lured with false promises of good jobs and better lives, and then forced to work under brutal and inhuman conditions.

It is a high priority of the Department of Justice to pursue and prosecute human traffickers. Human trafficking frequently involves the trafficking of women and children for sexual exploitation, a brutal crime the Department is committed to aggressively investigating and prosecuting. Trafficking also often involves exploitation of agricultural and sweatshop workers, as well as individuals working as domestic servants.
at November 26, 2008 No comments: Links to this post 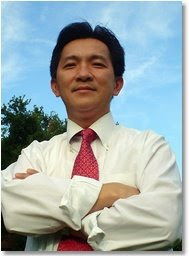 Received in LSI mailbox today is an article written by Richard Fausset of LA Times - "In New Orleans, Beyond Black and White Politics" - on a US congressional race this December 6 (A Saturday for that matter) where there is a Vietnamese-American running against a black incumbent.

This is the Lousiana's 2nd Congressional District where the majority is black voters (65% to 30% Whites). Representative William Jefferson has represented the district since 1991 but is now facing corruption charge when investigators found $90,000 cash in his freezer. He is the first black Democrat elected to Congress from Louisiana since Reconstruction. His challenger is Joseph Cao, 41, an immigrant lawyer and a former Jesuit seminarian. Cao is a Republican with limited political experience but with a high hope of transcending race between ethnic voters. 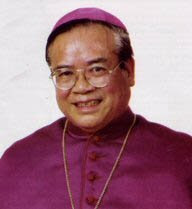 Joseph Cao came to the US when he was 8 years old and typical of all Vietnamese-Americans in New Orleans, a devout conservative Catholic. New Orleans and vicinities have about 18,000 Vietnamese-Americans. This rerepsents less than 2% of the population. Joseph Cao has never held any public offices but running for US congressional seat, it is never a criteria. He is a parishioner of the Mary Queen of Vietnam Catholic Church. The same parish that Bisoph Mai thanh Luong, the only Vietnamese-American bishop, used to reside as a parish priest.

With limited funding and lack of an independent base, so what are his odds for sneaking in? Well it is depending on a number of factors:

1. Typical low turn out for a December election with historically about 20% of registered electorate.

2. Black's satisfaction with electing Obama and deciding to stay home for the race.

3. Republican high turn out and independents who could not stand the status quo corruption.

4. A strong turn out by White Catholic voters.

5. Arrogance of the incumbent for not taking Cao seriously.

6. And of course, miracle does happen to even politician. Don't ever underestimate the power of prayer and the Catholic Church in politics.