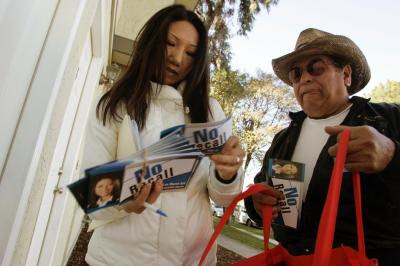 Robert Sandoval, the president of West Evergreen Neighborhood Association, is being investigated by both the San Jose Police Department and the San Jose City Election Commission for assaulting campaign volunteers of Minh Duong.

On Thursday, August 26, in the early afternoon at a neighborhood near the Tropicana Mall,  two volunteers for the Minh Duong Campaign were accosted and verbally attacked by a volunteer from the Madison Nguyen Campaign, identified by the police as Robert Sandoval (photo ID).

According to the volunteers, they were first stopped by a black Honda Accord with two Asian guys driving in the front seat.  Then a Hispanic man, who was later identified by two other witnesses, as Robert Sandoval, stepped out from the back seat and started threatened to beat the s... out of them if they don't leave the area.  He then pushed one volunteer to the ground.  As two witnesses saw the incidence, they approach the two volunteers and Sandoval sped away with his cohorts.  One of the volunteers had the presence of mind to write down the license plate.  Immediately following the incident, the Duong volunteers called and reported the incident to the candidate, Minh Duong. They then drove to the SJPD office and filed an incident report (Case #10-XXX-XX19) under 240 PC Assault and Battery.

Robert Sandoval as the readers recall was the person that filed a complaint against Minh Duong for not filing his expense properly.  In his testimony to the Election Commission against Minh Duong, as reported by LSI last month -

....Robert Sandoval told the commission that he has been a supporter of Madison Nguyen for the last 6 years. When asked by Commissioner Shepard what prompted him to file the complaint, Sandoval gave a lengthy answer. According to him, he was surfing the Net and noticed a lawsuit brought by Ron Wong (President of ICG) against Minh Duong. Being a “concerned citizen”, he promptly brought it to the attention of City Clerk Lee Price to see if Minh Duong could be disqualified as a candidate not having good moral character. Next, he brought the case to the attention of Mayor Chuck Reed. Sandoval said that the Mayor thought the lawsuit has merit and recommended City Attorney Rick Doyle to file the complaint with the Election Commission to disqualify Minh Duong. Still according to Sandoval, he then filed the comnplaint and personally followed up with the lawyer, Mike Moye, who was responsible for the investigation on behalf of the Election Commission. His reason was to "assist so that the investigation can be successful”
at September 03, 2010 No comments: Links to this post