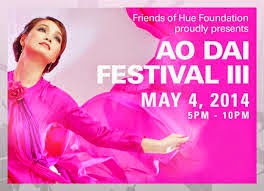 Against a tapestry of colored flags and red silks, one hundred dancers dressed in the Vietnamese Ao Dai will dance to the drumbeats of forty drummers in front of the Fairmont Hotel San Jose, California on Sunday, May 4, 2014, marking the opening of the 2014 Ao Dai Vietnamese Cultural Festival.

Designers from Vietnam and the Greater Bay Area are invited to celebrate Vietnamese visual arts, language and energy. The event is designed to promote the beauty and grace of Vietnamese women. This family-friendly event will be a stunning visual feast appealing to everyone who appreciates beauty, fashion and cultural diversity.

Santa Clara County Supervisor Dave Cortese is trying to fulfill his political ambition to become the leader of San Jose.   He lost the mayoral race to his arch enemy, the current Mayor Chuck Reed, in 2006.

For a city with a population comprises of 1/3 Hispanic, 1/3 Asian and 1/3 White, forming a rainbow coalition is a must for anybody to win a city wide race.   Reed, in 2006, won by carrying the Asian and White votes.

It is no accident that for the last 8 years, Cortese has spent considerable time to build his image among the Vietnamese-American voters.

Cortese, being a strong supporter of labor unions, will likely to carry the Hispanic votes.  His strong presence in the Chinese-American community (with the help of San Jose City Councilmember Kansen Chu and his wife) will certainly help him to win this voting bloc.   His  alliance with San Jose City Councilmember Ash Kalra will gain him some votes with the Indo-American community.  Of course, it does not hurt when your chief-of-staff is also Indo-American.


Without a doubt, this race is strongly followed by the community, especially when Councilmember Madison Nguyen is one of the candidates.    Nguyen barely survived a recall  and she is considered to be a polarized figure in the community.   Recently,  there was a candidate forum hosted by a network of  Vietnamese-American  organizations with over 400 people attending -

Just to see what the conventional wisdom is revealing, an ad hoc poll was conducted by our friend at Asian Poll Media and LSI would like to share the results

The question was asked -  If the primary would be held today, who would you likely to support out of the five candidates?

A field of 315 most likely Vietnamese American voters (145 women and 170 men) were asked during the third week of April.  The poll was conducted within a 4% margin of error.

This is a surprising number since Dave Cortese is not expected to win the Vietnamese-American votes, his game plan is to have enough support to prevent Nguyen to carry an overwhelming majority.

The poll shows that the Vietnamese-American community is ambivalent about Nguyen.  It also reflects that fact that she has not actively reaching out to the community for the last 4 years.

She has been flooding the community with a campaigning theme that reads - "Vietnamese Voters vote for Vietnamese Candidate."

This so far has its limit.