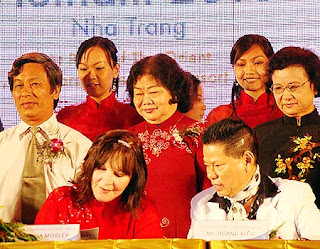 Hoang Kieu, the general director of RAAS Group in Agoura Hills, CA, has been spearheading the effort of bringing, planning and promoting of Miss World 2010 to Nha Trang. He is collaborating with Miss World Organization and the Vietnamese communist government to make the event as one of the major attractions for the Vietnam tourism industry. The picture above is the signing ceromony in Ho Chi Minh City by Hoang Kieu and Julia Morley (Chairwoman of Miss World Organization) late last year. 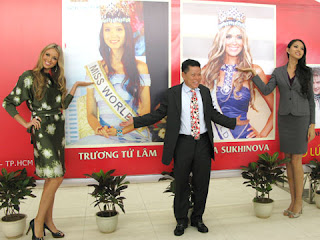 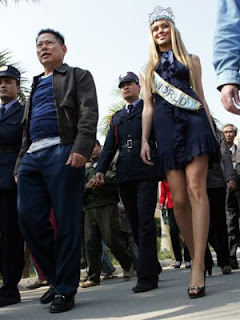 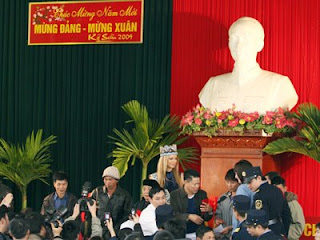 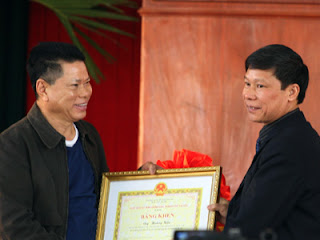 Hoang Kieu is well known in Vietnam for his generous charity work as well as his involvement in exporting Vietnam goods to China market. In Orange County, he stays away from the limeline unlike Frank Jao (Phuoc Loc Tho Mall) or Chieu Le (Lee's Sandwiches). However, he is politically quite active with his money. Recently he, his CFO and two other RAAS employees donated $4800 each to Sate Assemblyman Van Tran's congressional campaign war chest.

With Van Tran receiving political donation from businessmen who have close tie with the Vietnamese communist government - Frank Jao gave Van $1,000, David Duong and Victor Duong gave $4,800 each - Is the right wing anti-communist crowd in Little Saigon given in to the fact that their anti-communist stand (I see red communist flag everywhere) have gone soft after 35 years since the Fall of Vietnam?? 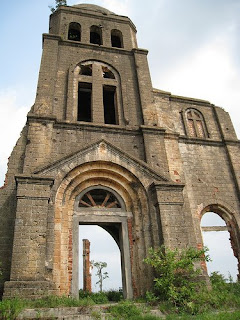 Tam Toa church is an old Catholic church built during the late 1800s in the province of Quang Binh in central Vietnam. During the Vietnam War, the church was destroyed by American bombs in 1968. As part of the current communist government propaganda, it remains undisturbed as a war relic.

Tam Toa parish is one of the oldest Catholic parish in VN with its root date back to the mid 1600s.

There have been on going dispute between the government and the rebuilding of the church. The Diosce of Vinh and the Archdiosce of Hue have been trying to reclaim the church (what left of it and its ground) since 1996 when it was taken back by the local government in an attempt to turn into a war symbol of American aggression. Up until 1996, mass was celebrated weekly in front of the church's tower.

In February of this year, after years of unfruitful negotiation, 14 parish priests and Bishop Cao of Vinh Disosce decided to concelebrated mass on the property without obtaining permission.

Recently, rumor was spreading that the local government will build a tourist resort next to the church. The parish people in response started building an alter and erecting a giant cross on the property. On July 21, the government finally had enough and sent in police to disperse the crowd who were gathering to continue their construction and also to protest. A dozen people were arrested and some were beaten badly by the police. The situation made worse when the police attacked two priests from other parishes who went to Vinh Diosce to show support. The two are in critical conditions.

Some of the Vietnamese Catholics in Vietnam (about 10 million strong or 12% of the population) responsed by holding vigil masses and silent protests all weekend long in central Vietnam. This is a direct challenge to a dictatorship government.

Even though the situation is view as conflict between the Catholic Church and the Vietnamese government by the rest of the country, the issue of confiscated land and the rights of land ownership have been a flashing point between government and the general public for many years. Whether the Tam Toa crisis will lead to major changes in the government or force the government to take harsh actions against those who challenge its absolute authority is remained to be seen.

Here are some pictures of the many vigil masses and open peaceful demonstration by the thousands (some estimate to be in the hundreds of thousands) against the government in VN last week. 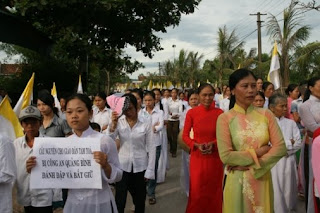 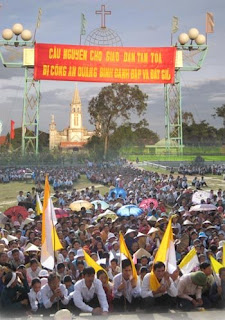