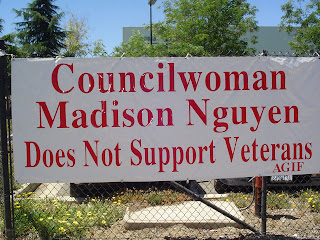 As everybody in the Hispanic community knows in 2006, Nguyen tried to purposedly bankrupt American GI Forum by refusing to grant them a rezoning in order to attain a licence for weekend event usage at their facility on Story Road. The rezoning was negotiated before Nguyen took office by other city councilmembers trying to save the financially strap AGIF. Without the rezoning, AGIF would not be able to generate the necessary revenue to keep their facility as well as their own operation. Abel Cota, the then head of AGIF put it:"She tried to put us out business because we happened to support Linda Nguyen in the last election".
AGIF was established more than half a century ago to support Hispanic veterans. The organization was so angry at Nguyen's vendetta that they put up a huge banner in front of their facility on Story Road (see picture).
Luckily for AGIF, a Vietnamese-American woman decided to purchase their facility above the asking price and leased it back to AGIF for their function. But what disturbing was the fact that Nguyen called her demanding to know why she wanted to purchase the building. The woman, Loannie Lam, was upset at the unsolicitied phone call. She said:" Nguyen called and told me why I should not invest in this building for it was overprice (?) She suggested that I should invest in Vietnam Town instead."
Apparently, a woman's scorn is something not to deal with lightly, especially if she is in the position of power.
at February 24, 2009