The Challeng of Pham X Quang 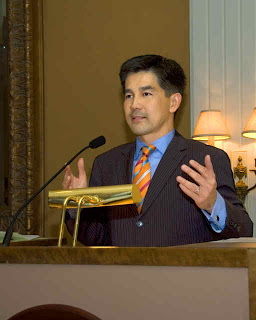 With the decision to enter the race for CD 47 as a Republican a month ago, Quang X Pham is now facing the first test – Can he raise enough money to make his campaign credible?

For the Republican primary race in June against current State Assemblyman Van Tran, he will need to raise about $500,000 to be competitive. With Tran raised about $175,000 so far for the primary, Pham is a pragmatist and he will no doubt either meet the challenge or drop out.

Quang X Pham has the credibility as an ex-Marine pilot, an author, a successful businessman and has a natural Vietnamese-American base from the many Vietnamese-American veterans (his dad was a pilot) and the Vietnamese-American voting base of County Supervisor Janet Nguyen. Even though he had often expressed of his desire to run for congress, some congressional Republican leaders would prefer that he declared his intention to them as early as April - May when Tran was heavily recruited by them.

The Vietnamese-American voters will no doubt play a role in the upcoming primary. Even though they are about 8% to 10% of the total voters in the CD 47, they represent about 20% of the Republican voters in CD 47.

Janet Nguyen has been silent about the race. Her district is 40% overlap with CD 47 and her Vietnamese American constituent is considerable. On the other Tran’s assembly district is 20% overlap with CD 47. However, Nguyen has no desire to run for congress at this point in her career. Just from the name recognition along, she would be a better bet in the CD 47 race than Tran against Sanchez. Only one out of the 5 major PACs in OC so far has committed to Tran (The Family Action PAC).

While most of the mainstream voters don’t really care at this early in the primary race, a number of observations are worthwhile sharing as LSI met up with the local Vietnamese-American news media last week.

- Both Pham and Tran have the name recognition in the community.

- The major sentiment of the community is neutral at the moment but with curiosity for Pham.
- Tran is a polarizing figure in the community with his many bitter fights against Janet Nguyen in the last 3 years.

- Janet Nguyen’s name keep popping up on whether she would run for something in 2010. There have been rumor of her possibly running against Lou Correa.
at July 16, 2009

Tran is a hack. His only hope is if Loretta runs for Governor and vacates her Congressional seat.

I wish Pham had run as an Independent. Non-Republicans cannot vote for him in the primary - which means he will have a hard time against Tran.

In an Open Primary I would give Pham a huge advantage as he would appeal to independents.

Mr. Quang Pham, as a new comer, would have to do a lot of convincing to garner precious financial and political support, while incumbent candidates are seating on sizable treasure chests. It remains to be seemed if Mr. Quang Pham could turn a groundswell of goodwill for him as an accomplished citizen into political capital.