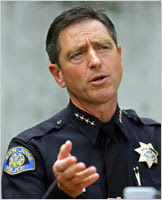 A coalition of Latino, Asian-American and African-American recently had publicly asked SJ Chief Police Rob Davis to resign.  Their request is published in the Mercury News

The funny thing is due to the disagreement between the two leading organizations of the Vietnamese-American community in San Jose, Viet-AmericanVoters of Northern California and Vietnamese-American Community of Northern California, the colation decided not to include them in the group.   The coalition includes NAACP, Asian Law Alliance, La Raza Lawyers; African-American Community Services Agency; Silicon Valley De-Bug; Services, Immigrant Rights and Education Network; San Jose Peace and Justice Center; National Lawyers Guild; Asian-American Center of Santa Clara County and Coalition for Justice and Accountability are united in their call for the police chief to step down.


The coalition will have a press conference in front of the city hall at noon on Tuesday November 24 to update their progress including their succesful effort to have the release of the Daniel Pham's 911 tape.   From the latest rumors, attending the press conference will be members of the Viet-American Voters of Northern Cal. but not the members of VACNORCAL.

VACNORCAL sees this as an issue of not a community being mistreated by those in power but an issue of communist vs. anti-communist.  The logic is simple to VACNORCAL.  Since the exchange student Ho Phuong comes from Vietnam, he is a communist and VACNORCAL cannot be seen as supporting a communist.  Hence, VACNORCAL decided not to join the coalition against their effort of pushing for changes as well as asking for the resign of SJPD Chief Davis

The Viet-America Voters of Norther Cal is made up of mostly younger activists and they only see this is a community issue as a whole.  In order to better the community, there has to be drastic changes.  And Phuong Ho was a victim of an abusive system that needs to be changed.
at November 23, 2009