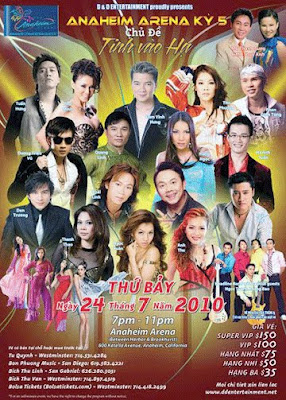 Dam Vinh Hung, a very popular singer from Vietnam is doing his annual concert tour of North America and will be in Anaheim and Santa Clara  these upcoming two weeks.  His concert in  San Jose (November 2009) was a big hit.  Dam Vinh Hung has been doing worldwide concert  since 2004.  Since he is from Vietnam, the critics from the anti-communist folks in the Vietnamese-American community have claimed that he is a cultural agent of the government trying to spread communist propaganda.  As usually, there will be a contigent of demonstrators on hand for his events in both cities.   The Santa Clara police department is charging the concert organizer $15,000 for crowd control in case the demonstration becomes raucous.
at July 16, 2010