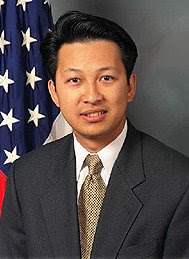 It must have been quite a disappointment for the first Vietnamese-American US Congressman Joseph Cao to attend a fund raising event in his honor in the heart of Little Saigon. The organizing committee are the who's who of Little Saigon political power - Assemblyman Van Tran and his cohort of councilmembers - Dina, Tri, Andy, Truong, and school board trustee Lan Nguyen. And the event was organized by US Congressman Ed Royce and Van Tran themselves as the print on the invitation would suggest. In addition, the weathiest businessman of Little Saigon put his name to welcome Cao - Frank Jao (V-Home Group and Bridegecreek Development). And of course, all the advertisement, hype and media attention from mainstream to all newspapers in Little Saigon.
Supervisor Janet Nguyen, Garden Grove, city councilmember Andrew Do and Dr. Pham Long ( Orange County Board of Education trustee) were not invited. And they did not show up.
It was a dead event that the ambient probably prompted Joseph Cao to give such an uninspiring rambling speech. The whisper after the fund raising event was this guy really is an accidental congressman. John Duong (as shown in picture above), vice president of V-Home Group and one time mayoral candidate was the MC for the event. Frank Jao and his wife were the official host and hostess.
So why did the crowd staying away? This is a long story but it will make sense if one can follow the names of the players.

To really understand the Vietnamese-American political power of Little Saigon and its many players, let us start always with Van Tran. Tran often goes to San Jose to raise money for his campaign even after his victory in 2004. When asked why not Frank Jao, he replied tortly:" I know Frank for all of my political career and he gave me a total of $200."

The real reason probably is because Frank Jao never forgave Tran for pulling away Andy Quach from his influence. Andy was Frank's project just like with John Duong. Frank plugged Andy out of obscurity and put him up to be the next the political superstar.

John Duong is a Frank's project from the beginning. And when time came, he raised hundreds of thousands for Duong in his Irvine mayoral race in 2006. Duong is good looking and with an impressive resume on paper in a city dominated by Asian, it was a safe bet. Yet he lost in a landslide.

Five years before, With Frank's influence in the Republican Party, John Duong was appointed as the ED of the White House Initiative on Asian Americans and Pacific Islanders. It is one of those political appointee positions created as pay back the big donors. The office was actually created by President Clinton and the first ED was Ngoan Le of Chicago political machine.

A year into the job, John Duong gained reputation for using the office as a Whitehouse access gate for Chinese businessmen from Taiwan and Hongkong. In early 2003, Georgetown law professor Dinh Viet who was at that time the head of Legal Policy at the US Justice Department, promptly recommended the White House for Duong removal. John Duong was of course forced out as recommended.

Frank Jao in the mean time established a private equity fund called V-Home Group to invest in real estate and state-owned enterprises in VN. He put John Duong as vice president.
V-Home Group is a $10 million fund starting out with money from a lot of people in San Jose including Thanh Nguyen (owner of Paramit, a hi - tech board design and manufacturing company) and Trung Dung (a software entrepeneur).
Their initial investments were a processing plant in Binh Dien, Ho chi Minh City, equity stake in EMHI, a licensing company with rights for all Walt Disney products in Vietnam and a 5% equity stake in Vietnam Net, a bilangual internet news portal spin-off but still under the control of Vietnam Postal & Telecom. 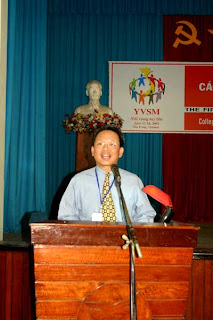 They installed Pham duc trung Kien to be the ED of this 225 people company. Pham (an MBA from Stanford) was an activist who in the early 90s lobbied hard for the release of his father and other political dissidents from Vietnam to come to the US. Now he lives in Vietnam full time running the internet news portal. His brother in-law, Nguyen anh Tuan (son of a high government official in Hanoi), was the chairman of Vietnam Net. Tuan was fired by Vietnam Postal & Telecom in 2007 for putting on Vietnam Net news about the fighting between China and Vietnam for the control of Spratly islands.

So let us tie all these names together, Frank Jao is one of the biggest investors in VN. And worse of all, he invested in a bilangual internet news portal that serves as a propaganda machine for the communist government against the overseas community. John Duong is Frank's boy. And Frank is well known for not giving back anything to Vietnamese -American community in Little Saigon.
So now we have an event with John Duong as MC, Frank Jao as host, Van Tran and his cohort as organizers and a US congressman who lacks charisma and experience and chances are will be a one term congressman (since his district is 65% African American and 85% Democrats), no wonder it was a dead event.

Many thanks for your nice posting , I like it.
Bathmate

We all understand the stories about USMilitary in Vietnam who killed entire villages including women and children, toddlers and infants.
Unashamed vet in the public sector, SUPPORTED BY YOUR TAX DOLLARS, earning six figures/year. This history should have affected the family business as well.