Janet Nguyen Stepping Up Her Attacks on Tyler Diep 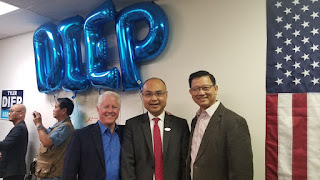 What in the world is going on with State Senator Janet Nguyen (R) and  her vengeance and hatred against Westminster City Councilmember Tyler Diep (R)?

Tyler Diep is running for the 72nd state assembly seat left open by Travis Allen (R).  In the June primary, he came in second behind the lone Democrat Josh Lowenthal.  The race saw Josh Lowenthal (D) pitted against four Republican candidates.  This is a Republican dominated district that covers part of Westminster and Fountain Valley, a typical Vietnamese-American political strong hold.

Janet Nguyen endorsed  Greg Haskins, an unknown in the Vietnamese-American community and behind the scene asked Long Pham, a perennial straw candidate, to put his name in the ballot.   Nguyen was hoping these two candidates would be able to take the Republican votes away from Diep.  To ensure there would be enough fire power, from Sacramento, she lobbied $180,000 of PAC money from California Chamber of Commerce to send out mailers attacking Tyler Diep. 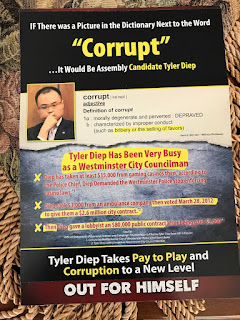 The cohorts of Nguyen also went on Vietnamese media and even staged a demonstration claiming that Diep is a communist sympathizer.   It is ironic since this group of anti-communist extremists -Phan Ky Nhon and cohorts.  Ironically, this is the same group  that had accused Nguyen of being a communist sympathizer for over a decade until 2016.   Now,  they are major allies along with the controversial Garden Grove City Councilmember Phat Bui.

Why Diep is a communist sympathizer?  He works as a commentator for the local TV channel called VietFace TV.    The 24 hour TV channel is partially owned by Thuy Nga Paris, a popular entertainment production company that produces and promotes 4 live musical shows annually for the last 40 years.   In order to have enough shows to meet the viewers' demand, VietFace TV often purchases shows from Vietnam.  In the eyes of the extremists, this is dealing with the communist government.  Also, Thuy Nga Paris performers are also doing their gigs in Vietnam; thus, this is another  proof that Thuy Nga Paris has ties with the communist government.   And because Diep is working for VietFace TV which is partially owned by Thuy Nga Paris, he is a communist sympathizer.

Diep and his campaign thought this convoluted logic was so ridiculous that they did not even bother to response.

A week after the primary,  as the extremists still harping about how they let a communist sympathizer won the race, Nguyen sent out an ultimatum to the OC Republican Party Chair (Fred Whitaker) demanding that the party refund her $2,500 donation to 2018 Flag Day (a major fund raising event for OC GOP).   The reason is because the OC GOP would not take back their endorsement of Tyler Diep as she had demanded.

Diep and his supporters finally had enough of the spoiler candidate, the false accusation, the strong- arm tactics to cut off the OC GOP's support.  Their first counter move is to discredit the flimsy accusation of being communist sympathizer by recounting the story of Janet Nguyen and her relationship with the Vietnamese Consulate in San Francisco.  His supporters cried out why attacking him as a communist when you should look at your own Janet Nguyen.

On July 6, 2006, Janet Nguyen as residing councilmember of Garden Grove, along with her supporter, took a flight from Long Beach to Oakland.   From there she drove  to SF and had lunch with the Consulate General Anh Tuan Tran.   According to her companion, the purpose of the meeting was to ask for fund raising for her supervisorial campaign.   A day later, businessman Eric Le met with her at Monterey Park and donated $5,000.   Eric Le is a close friend of Consulate General Anh Tuan Tran and has  business in Vietnam.  Subsequently, he raised thousands of dollars for her from his business friends who were heavily invested in Vietnam.   She apparently met with Anh Tuan Tran a number of times afterward at Orange Hill via the arrangement by Eric Le.

On June 22,  2007, when the President Nguyen Minh Triet of VN visited Dana Point and had the reception at St. Regis Hotel, Eric Le was one of the main hosts and organizers.   By then as OC supervisor,  Janet Nguyen joined the protest that was organized mainly by Phan Ky Nhon and his group (yes, the same aforementioned extremists).  However, there is an interesting twist to this hot and humid summer afternoon.  According to a witness, while with the demonstration, she made phone call to Eric Le to give him an update on what was going outside the hotel with the demonstration.


TD supporters are waiting for Nguyen to response to the story.  In the mean time, they start to point out her indifferent record for the last 4 years.

There is an interesting point to note about the Vietnamese community and their politics.  Janet Nguyen has used her power and influence trying to destroy candidates before as the state highest elected Vietnamese-American official.  She fervently attacked OC Supervisor Andrew Do during his 2016 re-election campaign and now Tyler Diep and his state assembly campaign.   Yet, they are not even her rivalry or opponent since none are vying for her state senatorial seat.

Many Viet voters in OC are asking why Janet Nguyen is using her political power to divide the community.    She wants absolute power and control of the community?   Or this is a personal vendetta and really about her self-satisfaction and ego trip?   Whatever it is, she better be successful at it or she will be losing a lot of political leverage while spending her political credit negatively.  Well, Andrew Do won his re-election despite Nguyen's all out effort to derail his campaign.

Rumor has it, she will soon endorse Josh Lowenthal (D) against Tyler Diep (R).  As a Republican elected official, she has endorsed Democratic candidates against her own party's choices before.  In 2016,  she endorsed Michelle Martinez (D) against Andrew Do (R).