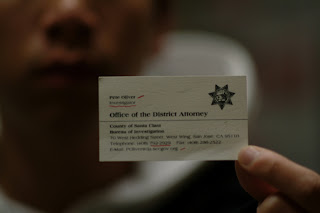 When talking to the community, Councilmember Madison Nguyen always points to the fact that she is the chair of the San Jose City Public Safety Committee. She also emphasizes that she is a member of Reed's Gang Prevention Task Force (with a $4.3 million budget for gang prevention). And in her flyers to people of District 7, she boasted her record of crime fighting while bringing job and economic prosperity to her community.

That takes us to a recent development in the fierce campaign for her political life.

"Officials blame the increase in violent crime in large part on a spike of gang violence......"

" Other data revealed that assaults in San Jose increased by nearly 7%..."

"Bobby Lopez, president of the San Jose Police Officer's Association, said there were 8,000 reported robberies last year in San Jose but the department investigated about 1,000.......

"Mayor Reed said reclaiming the status as America's safest big city is a priority and that city officials have already implemented some changes that could help achieve that goal".

The people in District 7 certainly hope that the change would not include having Nguyen's campaign staff shawdowing and taking pictures of people as they walk the precinct against her.

But that was exactly what had happened so far in this campaign. According to the City Clerk's office, Nguyen's campaign submitted pictures to the city attorney, Richard Doyle, who personally asked the DA's office to take action.

DA's investigators knocked on the volunteers' homes at 7:00 AM demanding to see if they are US citizen as well as resident of District 7.

Four known families living in District 7 were interviewed by investigators because as one of them would mention:"When was it a criminial activity to walk the precinct and gather signatures against a political candidate." One young college student, Linh Phan, who was being shadowed and his photograph taken decided to ask for a business card of one of the investigators. Pete Olive, the DA's investigator actually came to his parents' house at 7:00 AM in the morning. He was nice about it the best he could of course.

None of the four families were being charged with any violations.

Nguyen being the chairperson of the Public Safety Committee definitely can pull some strings to intimidate the voters and peơple who are living in District 7. The irony of course is that most of her volunteers and supporters are either out of state, out of town or don't even live in District 7.

Personally, LSI thinks Nguyen are overcautious with her hard ball politics, with all the powerful elected officials, government people, mainstream media, South Bay Labor supporting her, she will literally crush the Recall Team. Why even bother?
at February 11, 2009