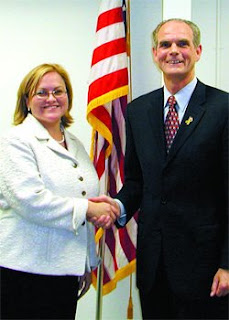 The community is buzzing with Mayor Reed's prediction that Nguyen would win when asked by the Merc after last week conference by the Recall Team. Reed made the prediction with confidence and LSI would not blame him. The vast resources and supports Nguyen is receiving make her a concensus favorite. Nguyen has powerful elected officials, wealthy developers, influential lobbyist and hundreds of members of South Bay Labor Unions to help her. She also unites the two most powerful but opposite political forces in the Bay area in her corner - Mayor Reed and South Bay Labor Unions under the leadership of Cindy Chavez.

It is not a secret that Reed and Chavez personally could not stand being in the same room together. But the two have many things in common, more than they would care to admit. Both political careers were greatly influenced by Ron Gonzales. Chavez's political career was paved for by Gonzales (Even though she would never admit it according to Gonzales). Reed's ascending to mayor was paved because of the corrpution under Gonzales administration. They also share a trusted friend who has an office on the nth floor of the Knight-Ridder building. Now, they are united against the same community that they had worked hard to gain support during their mayoral election.
And they both predicted that Nguyen would win, one publicly, the other one indireclty. LSI says right on!!