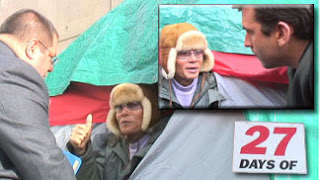 Two weeks ago, Councilmember Liccardo was walking the precinct with South Bay Labor Unions in support of the anti-recall on El Cajon Dr. In an awkward moment, he ran into the recall team walking in the same block. The leader of the team politely asked him (Well, more like calling him out). To not causing anymore embarassment than necessary, LSI would just report that the leader basically asked in the context - "What is going on, we thought you think Madison Nguyen is deserving it and wish that she would go away." Liccardo did not answer directly and walked away mumbling some excuses.

In today's Tet Parade, in front of mostly an anti-Madison Nguyen crowd and recall signs, he announced he is one of the greatest supporters of the community. According to the organizers (who are recall suporters), he only agreed to attend the parade under one condition, he would only stand on the podium addressing the crowd and would not take part in the traditional riding of the car with other city councilmembers. Councilmembers usually take part in both as part of the tradition.

See the video for yourself on

Councilmembers were under pressure to boycott the Tet Parade. Kansen Chu was not about succumb to such pressure. The councilmembers knew that and to them he is Asian so he is part of the Vietnamese-American community anyway. But it took the chutzpah (no pun intended) of a new councilmember to stand up to what is right. Of course LSI does not know what being said behind close door. But it could not be more dramatic than what John Zamora said in front of city hall when calling out Madison Nguyen: " I must be myself as a Latino, when I face adversity, choose right over wrong, ethic over convenience and self benefit, truth over popularity".

Five of the councilmembers took the cue and followed the new councilmember's lead and the rest of the council members, well you can see on the video. Nora Campos stuck by her Labor Union's sister, Madison Nguyen and did not response to the invitation. Unlike last year, Nguyen was invited but similar to Campos, she did not response.
Reed declined and his excuse was he had a preplanned event and would be out of town. This was much better than last year when he did not even offer an excuse for not going.

Liccardo did not show up last year and gave an out of town excuse. It was awkward when an aide from the then Vice Mayor Cortese's office ran smack into him on Santa Clara Avenue as Liccardo was crossing the street while the Tet Parade was occuring.

Madison Nguyen has a lot friends in powerful places and she can pull alot of strings to intimidate people. With Cindy Chavez and Labor Unions squarely behind Nguyen, councilmembers like Liccardo who are looking to further their political career are wise to play both sides of the fence.
But if Liccardo was true to his friend, why even showed up to support an anti-Madison Nguyen crowd and risked upsetting Nguyen and Labor. These are the same people whom he insulted to be "so much disrespectful" to him and Nguyen. LSI still thinks Nguyen will crush the recall team so Liccardo should not worry.
at February 08, 2009