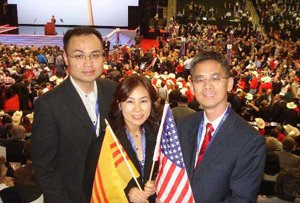 At the fund raising event for US Congressman Joseph Cao in the heart of Little Saigon last weekend, Diep Mien Truong, a 26 years old aide to Assemblyman Van Tran, announced unofficially his candidacy for state assembly to replace Van Tran. Tran is termed out in 2010.

Truong barely won his election 2 months ago for the Westminster city council. This will be the third Trannie running for a major office within the last 2 years. Here is a picture of Truong, Dina Nguyen and Trung Nguyen at the Republican Party convention in Minnesota.

Stop using my name! I am the original Saigon Insider!