With a little bit more than a week to go, the city council race is heating up in D7 with Minh Duong and his supporters taking the beating literally.  First it was Minh Duong's mom who had her car's window smashed in front of Minh Duong's house.   Then Dr. Ho Vu, a supporter of Minh Duong, happened to park his car in front of Minh Duong's campaign office recently.  Within a few hours, his window was also smashed.  The police was called to the scene and case report was filed.
There have been a lot of email by Charlie Ly attacking Minh Duong both in Vietnamese and in English.  He flooded the mainstream media,  ethnic media as well as different political organizations about Minh Duong and his business disputes.  The  interesting thing is Charlie Ly lives in San Bruno which is not even in the same county as San Jose.  Sign-in record showed that he visited Madison Nguyen's office at least 3 times last year.  He knows his way around the city with his email pinpoint to various department heads of the city  as well as of Santa Clara County.  Some of his innuendos are  politically twisted but kudos to him since it would take a person of knowledge and free time to go through public record,  find the information and then twisted them to become negative political issues.
And thene there was an incident in which Charlie Ly was caught putting Madison Nguyen sign illegally on somebody's lawn without permission.   The owner confronted Charlie Ly, he immediately yelled at her and threatened to beat her up.  She promptly took out her phone and took a picture of him.   She had filed a complain with the police.  Here is a picture of him running away as she took picture of him after he had threaten to beat her up. 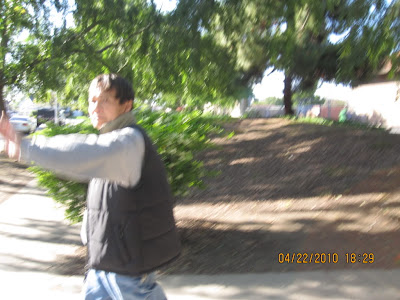 Both Minh Duong's mom and his wife are scared since they are worried for their safety with all the vandalism and threats by anynomous e-mail posting.   But again this is small town politics and these types of intimidation happen.  What suprising is why beating up on Minh Duong and his family since he is clearly not the front-runner?  Why would Charlie Ly from San Bruno spend so much time and effort attacking Minh Duong?
A footnote:  Here is another picture of Charlie Ly in one of the communty meetings in December 2009 when he suddenly erupted into profanity and proclaimed certain people in the meeting are agents of the communist government 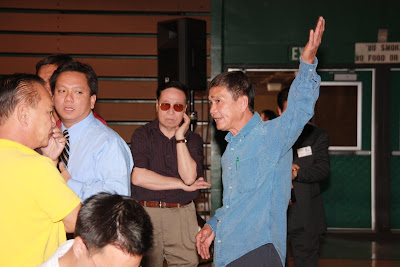