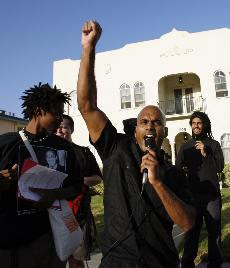 On 11/07, a group of about 60 college students from San Jose State University (mostly Vietnamese-Americans), demonstrated in front of San Jose City Hall to show support for Phuong Ho.


Phuong Ho is the student who was physically assaulted by 4 SJPD officers while handcuffed. The cell phone video captured the beating by his roommate is everywhere on the Web.

Meanwhile, the week before, Chief Rob Davis, personally paid a visit to the Vietnamese-American Community of Northern Cal (VACNORCAL). His visit came after a rather determined meeting at the Asian Law Alliance’s headquarters where Raj Jayadev (Silicon Valley De-bug) vocally suggested that there should be some concerted legal effort at the federal level against SJPD and the removal of Chief Davis. The meeting was attended by ACLU, NAACP, and other prominent civil rights groups.

The message from the meeting was quickly channeled back to the SJPD.

After being pressure by the Mercury News along with other community activists, Chuck Reed and the city council had decided that they will release the 911 tape of Daniel Pham shooting under certain conditions. It was a pyrrhic victory for the community for a closed door grand jury proceeding already determined not to charge the officers in the shooting death.

Dolores Carr on the other hand is looking hard over her shoulder for she knows that she cannot longer count on the community to deliver her the votes for 2010 election. She tried her best three months ago attending the Community Day event along with her husband asking for their votes. In front of about 2,000 people she asked for their votes while ignoring the fact that she had turned down their request to have an open grand jury proceeding on Daniel Pham as well as the release of the 911 tape. 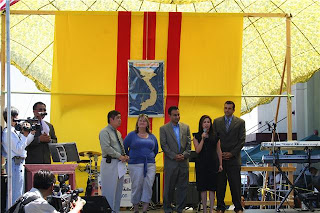 Meanwhile behind the scene, Madison Nguyen is going after her political enemy with vengeance.


She pulled her hammer after Community Day event in August.  The event was held the parking lot in front of VACNORCAL’s rented building on 10th street. This is the same building that Bill Clinton held his fund raising effort for his wife last year for her presidential run. The parking lot was filled with about 2,000 people. The event was put together by VACNORCAL, the same group that supported the name Little Saigon against Madison Nguyen and is now suing Nguyen for violation of the Brown Act.

VACNORCAL was served the following week with a Compliance Order to cease and desist all activities by City of San Jose Code Enforcement Division. The rationale? Their facility was not zoned for community center and assembly of more than 49 people. Penalties range from civil contempt to fine of $2,500 per day from the time the Compliance order was served. This is the same VACNORCAL that subsists on a $3,000 monthly budget and yet manages to have food kitchen, free health clinics, and provide facility use for all the cultural, religious and community activities. For the last 2 months, the community has to cancel all upcoming events.

Adding insult to injury, City Code Enforcement has set a team of Code Enforcement inspectors to “monitor” the activity of the community center every weekday and weekend since August. They would come during planned small events and meetings and “remind” that VACNORCAL will be shut down and pay stiff fines if their camera captures more than 49 people at the same time. Last week, a police car was seen at the parking lot with a police officer observing and taking notes of people coming and out of the community center.

With the city in budget crisis, the city is definitely going the extra mile spending money to “serve” a nonprofit foundation that happens to disagree with the policy of a city council member.

A city council’s main objective is to serve its community’s interest and to provide support for a community to grow. In a twisted world of Madison Nguyen, this is a second time that she has used zoning law to shut down a nonprofit foundation that did not support her. Remember the GI Forum anyone?
at November 13, 2009