Garden Grove City Councilman Phat Bui is not a happy camper now a day.   His barrage of negative campaign against Supervisor Andrew Do with the whole purpose of being a spoiler in the recent June primary is now coming back and haunt him.

Karma is against him this year and it always happen in three.

First, he spent more than $200,000 of his own money on a dirty negative campaign to run against a well-liked candidate in the Vietnamese-American community.   He lost in a landslide and in the process was exposed to be a charlatan.  During the campaign, to bolster his image, he falsely claimed to have three college degrees.   In reality, he was a college drop-out.    It turn out, he also lied on his contract bid about him having a college degree.

And he is a member of Orange County Boy Scouts of America Council. 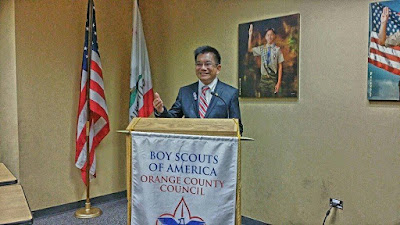 
Side Note:  His dream of becoming mayor is in doubt this year.  This is a wide open race with the incumbent not running.  Incumbent Mayor Bao Nguyen is stuck in a no-win situation with his unexpected second place finish behind Lou Correa for the congressional race.  Nguyen is  far behind in the poll but he cannot pull out of the race now to run for his mayoral seat.

It could have been his if he did not mess up his political career with his run against Andrew Do.
at August 12, 2016